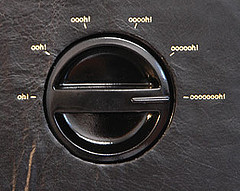 Imagine, if you will, what it might be like to have a kind of switch wired into yourself that triggered tiny electrical shocks in your orbitofrontal cortex, giving you what would effectively be an “orgasm button”. Well, this isn’t science fiction any more. [image by bbaunach]

Transhumanist thinker George Dvorsky takes a look at the history of pleasure-centre brain-tweaking, and considers the implications of the technology becoming affordable and readily available:

So, should these devices be banned?

Like the current prohibition on both soft and hard drugs, there’s a certain efficacy to a patriarchal imperative that works to protect citizens from themselves. Sex chip junkies wouldn’t be unlike other kinds of junkies. Highly addicted and dysfunctional persons would find themselves outside the social contract and completely dependent on the state.

But what about the pursuit of happiness and other freedoms? And our cognitive liberties? A strong case can be made that we all have a vested interest in the quality of our own minds and the nature of our subjective experiences. Ensuring access to these sorts of technologies may prove to be a very important part of struggle for psychological autonomy.

Is the best society the one that protects its citizens from all potential pitfalls, or the one that educates them as best it can and lets them take care of themselves?