But if you scratch a film buff, underneath you’ll find someone who thinks they can predict how well a movie will do once it gets released… and Hollywood reckons that’s an as-yet untapped source of funding for big-budget blockbusters. Hence HSX, the Hollywood Stock Exchange, is set to re-launch in April of this year as a real-money commodity exchange [via SlashDot]:

Since 1998, HSX has allowed just-for-fun traders to buy and sell valueless shares in Hollywood films based on forecasts of what the pics will ring up. Once launched, a new HSX site will list current and imminent movie releases with their projected four-week domestic grosses and allow exchange users to take long or short positions on the films.

A formal announcement about rules and guidelines for HSX users is expected closer to the launch. The exchange hopes to lure hobbyist investors as well as industry professionals, though the latter will be prohibited from improper insider activity.

For instance, distribution execs with access to early boxoffice data will be barred from making trades on the exchange after a film has opened. But film financiers will be allowed to invest in HSX an amount equal to a minority percentage of their total investment in a movie.

(Oh, man, you just know there’s gonna be some spectacular gaming of this system at some point, assuming it lasts long enough for gaming it to be worthwhile. It’s just too tempting, especially for such a historically desperate and greedy industry.)

Investors wishing to participate in the exchange will buy “contracts” priced at one one-millionth of a film’s projected boxoffice, with films to be listed on the exchange from the time productions are announced in the industry trade papers. Trading will begin six months before a movie’s anticipated wide release.

I make no claims to financial expertise of any kind, but I think I’d still assume that the safest way to gamble on the future of Hollywood properties would be to invest in something else entirely…

But a thought occurred to me while reading about HSX, namely that something like a stock purchasing model might act as a sort of bolt-on or extension to the crowdfunding models for creatives that we were discussing the other week. Say you’re in a band, you’ve done a few national tours, self-released an album, got some buzz going. How do you take things to the next step?

Systems like the newly-in-administration SellaBand are all well and good, but there’s still an intermediary middle-man involved, and the investment is conditional as well as project-specific; so why not just float your band (or your two-person animation studio, or yourself as a writer, or your guerrilla puppetry theatre mob or whatever) like a public company, offering shares to potential investors who tend to buy oil shares in exchange for their influence and input on what the band does? Product replaces dividends, tours and appearances are booked according to geographical distribution of fans, etc etc… it’s a bit like Kevin Kelly’s 1,000 True Fans idea, I guess, but much more formalised, with legally-binding obligations in both directions.

I’m pretty sure someone could knock up a software suite for managing all the paperwork necessary in order to make this happen, though I’ll confess that my knowledge of buisness law is sufficiently lacking that I have no idea whether or not it is legal (let alone practical, given the lack of a trusted and reliable micropayments platform and the morass if international business law). Can anyone in the audience shed a light on some of the details?

And more to the point, would anyone like to buy shares in Futurismic? We may not be profitable, but we’ve got a warehouse full of kudos… 😉 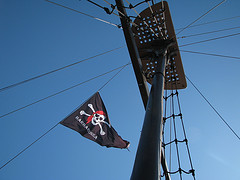 The Somalian tanker pirates are back in the news – apparently they’ve set up a sort of ‘stock exchange’ to handle the influx of business and investment opportunities and feed their ransom money back into the local area [via BoingBoing; image by bazylek100]

The gangs have made tens of millions of dollars from ransoms and a deployment by foreign navies in the area has only appeared to drive the attackers to hunt further from shore.

It is a lucrative business that has drawn financiers from the Somali diaspora and other nations — and now the gangs in Haradheere have set up an exchange to manage their investments.

One wealthy former pirate named Mohammed took Reuters around the small facility and said it had proved to be an important way for the pirates to win support from the local community for their operations, despite the dangers involved.

“Four months ago, during the monsoon rains, we decided to set up this stock exchange. We started with 15 ‘maritime companies’ and now we are hosting 72. Ten of them have so far been successful at hijacking,” Mohammed said.

First point I’d make is that this reads much like a press release – as if the Reuters guy went down, got a few quotes from the people involved (who were only too keen to put a gloss of success on the operation for the international media) and filed the copy. This is a story about bad guys, so if the bad guys want to appear like they’re really bad, why not quote ’em verbatim? I doubt things are running quite as smoothly as they’d like us to believe.

That said, the core of the story is eminently believable… and if the stuff I read in my old job as an employee of the Royal Naval Museum is to be believed, there’s considerable historical precedent. The buccaneers of the Caribbean had thriving dependent communities and investment programs, and operated with a similar degree of impunity at the peak of their powers, as did the Barbary corsairs. As the nation-state model of political power decays, I suspect we’re going to see more interstitial criminal communities arising to skim the cream from international trade – those tens of millions of dollars that the pirates are raking in aren’t comparable to the higher cost of sending navies out to stop them. Which in turn leaves the door open for the rise of mercenary navies to take on the work of protection…