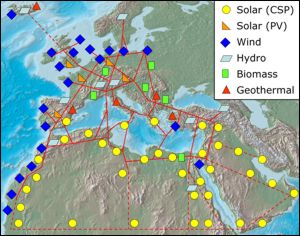 Now this is very positive. Last week there was talk of a giant ‘supergrid’ connecting much of Europe to wind turbines across the continent, to take advantage of whenever the wind was blowing.

Now the Guardian reports on Desertec, the plans to put hundreds of solar concentrating plants on the North African coasts and in the Middle East. Two thirds of the estimated 100 Billion Watts would stay in the countries producing the energy, with another 30 Billion Watts (around of all of Europe’s use) being pumped via underwater cables to the EU, which would provide a chunk of the funding for the project. With the Bali talks now underway to find a new version of the Kyoto treaty, projects like this could be a major facet of reducing carbon emissions. German energy expert Gregor Czeich reckons with new higher efficiency power lines a 100% renewable powered Europe could be possible in the near future without costing much more than the current fossil fuel system.

[via the guardian, picture by TREC]