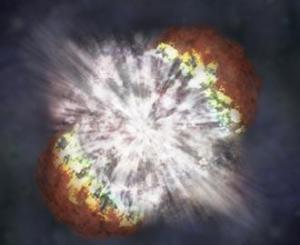 Earlier in the year a gigantic explosion lit up the sky. Supernova SN 2006gy, around 100 times brighter than a typical example, created a real puzzle to astronomers – how did such a big event occur? Currently there are two main models for Supernovae – type I occur when a white dwarf accretes too much material from another partner star and crosses the unstable Chandrasekhar limit, forcing nuclear fusion in the core. The second principle type, type II has a larger older star running out of hydrogen in its core to burn, leaving the outer layers cooling and falling inward. When the pressure from the infalling layers gets high enough, the helium ignites – a type II supernova.

The sheer brightness of SN 2006gy doesn’t fit any current theories, and has left astronomers baffled. A new model suggests that the star exploded not once but twice or as much as SIX time, with the outward material from later novas hitting earlier remnants to create the bright lights in the sky. A somewhat similar star, Eta Carina, is not too far off exploding in our own galaxy, which should provide an amazing night show.

[story and image via Science Daily]