Your futureshock phobia headline of the day, courtesy of Wired UK: “Snake-bots slither inside your body during surgery“. Aaaaaaaaaaaaaaaaaaaaargh!

A reminder (if such were needed) that technology is a double-edged sword: while remote-controlled tech can be used to kill, it can also be used to save lives, as demonstrated by the first successful remote-controlled robot heart surgery procedure, performed earlier this week in London [via SlashDot]. 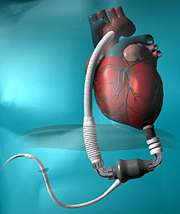 Physicians have successfully implanted an artificial heart that does not beat:

Salina Mohamed So’ot has no pulse. But she is very much alive.

The 30-year-old administrative assistant is the first recipient here to get a new artificial heart that pumps blood continuously, the reason why there are no beats on her wrist.

An interesting development. I wonder if the efficiency and reliability of such artificial hearts will ever be such that people elect to replace their existing hearts with them even before their biological hearts wear out?

[via Slashdot, from The Straits Times][image from on Technology Review] 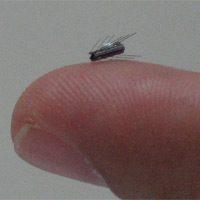 Feeling tiny insects crawling through your veins sounds like some sort of Burroughs-esque junk withdrawal nightmare (and with good reason), but Israeli scientists are hoping that a millimetre-diameter robotic bug could be used to diagnose and treat artery blockages and cancer in human patients without the need for major invasive surgery:

The little robot – with a diameter of just one millimeter – has neither engine nor onboard controls, instead being propelled forward by a magnetic field wielded on it from outside the patient’s body.

Scientists reckon the mini bot can even withstand massive blood flow and is able to push forward regardless of the magnetic field actuation direction, doing away with any need for exact localisation and direction retrieval.

A controller can move the little crawly creature in increments, with its speed of up to nine millimeters a second regulated by varying external magnetic field frequencies. Outside control also means the robot can be made to work for an unlimited amount of time, rather than suddenly – not to mention inconveniently – keeling over to die of battery failure in the middle of a medical procedure.

Promising… but still pretty freaky. You can thank regular reader and commenter Robert Koslover for grossing you out with this one. [image borrowed from linked article]