Regular readers will know my deep antipathy to the pro-surveillance canard “if you’ve nothing to hide, you’ve nothing to fear”, so they’ll also know exactly why I’m linking to and quoting from this lengthy and careful debunking of it [via TechDirt]:

Legal and policy solutions focus too much on the problems under the Orwellian metaphor—those of surveillance—and aren’t adequately addressing the Kafkaesque problems—those of information processing. The difficulty is that commentators are trying to conceive of the problems caused by databases in terms of surveillance when, in fact, those problems are different.

The deeper problem with the nothing-to-hide argument is that it myopically views privacy as a form of secrecy. In contrast, understanding privacy as a plurality of related issues demonstrates that the disclosure of bad things is just one among many difficulties caused by government security measures. To return to my discussion of literary metaphors, the problems are not just Orwellian but Kafkaesque. Government information-gathering programs are problematic even if no information that people want to hide is uncovered. In The Trial, the problem is not inhibited behavior but rather a suffocating powerlessness and vulnerability created by the court system’s use of personal data and its denial to the protagonist of any knowledge of or participation in the process. The harms are bureaucratic ones—indifference, error, abuse, frustration, and lack of transparency and accountability. 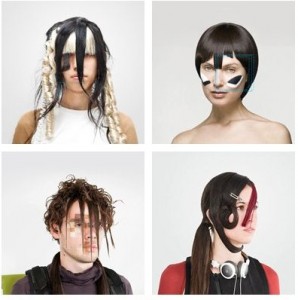 Looks like this one’s resurfaced again; we mentioned Adam Harvey’s efforts to spoof facial recognition software with weird asymmetrical make-up patterns a little less than a year ago, but the project now has its own name and URL – CVdazzle.com – and has expanded into using random hairstyling techniques… which should keep the junior stylists at Toni & Guy in business once the whole emo/Bieber/Lady Gaga thing dies out.

[ Image copyright Adam Harvey; please contact for immediate takedown if required. And yes, I know the pun in the title is terrible, but a) it’s my blog and b) it’s Monday, so please address all complaints to my imaginary lawyer. 🙂 ]

It’s been a while since it cropped up last, but regular readers may well remember my fascination with David Brin’s Transparent Society. My (and Brin’s) principle objection to the proliferation of surveillance cameras isn’t that they exist, but that they’re private; if they were publicly accessible to anyone, the panopticon suddenly inverts itself into something a lot less sinister. (Or simply sinister in a different way, I suppose, depending on your personal politics of privacy.)

By definition, closed circuit surveillance can’t be viewed by anyone without a physical connection to the device. But CCTV is being rapidly outpaced by networked IP cameras, accessed via the internet… and as this Ars Technica piece makes clear, a great number of them are simply sat out there waiting for you to log on and watch, although that may not have been the intent with which they were set up.

Finding IP cameras with Google is surprisingly easy. Though the information the search engine provides on the cameras themselves is typically little more than an IP address and a camera name or model number, Google still provides those who know how to ask with extensive lists of IP cameras and Web-enabled surveillance systems throughout the world.

The secret is in the search itself. Though a standard Google search typically won’t find anything out of the ordinary, pairing advanced search tags (“intitle,” “inurl,” “intext,” and so on) with names of commonly-used cameras or fragments of URLs will provide direct links to watch live video from thousands of IP cameras.

Though accessing public cameras can be fun and is essentially harmless, it’s impossible to divorce the voyeuristic aspects of Googling cameras from the innocent ones. Because the majority of the cameras the engine finds are meant for surveillance, most of what’s out there is being used in security applications and is not meant to be seen by others.

This hit home quickly as I worked through my list of search strings and found myself watching daily events at businesses around the world. Though jewelry stores typically use the top tier of surveillance and security gear (and therefore secure it better), I was able to find several boutique stores around the world and watch as customers browsed display cases full of gold and silver. Although just looking at a store online couldn’t cause any harm, knowing when the store is occupied or empty could prove useful to a burglar looking for an easy target, especially if one was able to narrow down where the store was (not a huge stretch with the camera’s IP address to trace).

That there’s the main argument against the Transparent Society: “bad people could use it to do bad things!” Which is true as it stands… but if every camera was open-access, then Johnny Q Burglar could be easily tracked and traced on his way to and from his break-in job using the surveillance devices in the streets around his target.

OK, so that’s a massive over-simplification, but it’s an interesting twist on the sousveillance/participatory panopticon riff; personally, I think I’d rather have a world of open-access cameras (and accept the multilateral loss of a certain aspect of the thing we call privacy) than the alternative: like, I dunno, the sort of privatised surveillance state my own home country is becoming.

What about you lot: would you be willing to accept being surveilled by anyone anywhere in exchange for the ability to do the same yourself?

Well, here we are: the last piece of Futurismic fiction for a while. But talk about ending on a high note! When Chris sent across Lori Ann White‘s “World In Progress” for me to look at, it felt as if she’d been carefully following the stuff I blog about here day after day, picking out some of my favourite riffs, memes and ideas, and rendering them down into one wonderful – and very human – story. It’s a super piece, and I’m proud to be publishing it; scroll down, read on, and find out why. 🙂

And in The Far Corner, Wearing a
Too-Tight Jock Strap and a Crown of Thorns–

CLOSE UP on a face.  Calm, pale, waves of black hair brushed back from a broad forehead.  Retro Guy.  Grade A, 100% Pure Professional Athlete.  No drugs, no mods, no tweaks, no prods.  Just like the old farts ordered.

He’s staring at the wall above the mirror through eyes blue as an Artic bay.  Pan to the wall, to the framed honest-to-god newsprint, photo of a thick-necked thug in too-tight jacket.  He’s small, like Retro Guy, like they all used to be, but the smug grin and his squinty eyes radiate “big guy” waves.  He’s got one arm around a sad brunette.

The caption: “Bruisin’ Brawler Gene O’Connor: ‘No God-Damned Upgrades!  My Boy Will be a Real Boxer, Just Like His Old Man.'”

The camera pans back to Retro Guy’s face.

“Hey, Old Man,” he whispers.  “This fight’s for you.” END_OF_DOCUMENT_TOKEN_TO_BE_REPLACED

Concerns begin to arise around the capabilities of Microsoft’s Kinect controller – what exactly are you allowing into your front room [via MonkeyFilter]?

On Thursday, Microsoft Vice President Dennis Durkin told the BMO Digital Entertainment Investor Conference in New York that Kinect offers “a really interesting opportunity” to target content and ads based on who is playing, and to send data back to advertisers.

“When you stand in front of it,” he said, according to news reports, “it has face recognition, voice recognition,” and “we can cater what content gets presented to you based on who you are.” Your wife, Durkin added, could see a different set of content choices than you do, and this can include advertising.

We’ve heard about these sorts of capability before, but not in such affordable and desirable household consumer electronics items as the Kinect. Microsoft would like to assuage any concerns, however:

Apparently as a result of Durkin’s remarks, Microsoft issued a statement Thursday that neither its Xbox 360 video-game controller nor Xbox Live “use any information captured by Kinect for advertising targeting purposes.”

The instinctively paranoid and mistrustful might find themselves appending a “… yet!” onto the end of that statement. And long-time Microsoft haterz will get a wry chuckle out of this follow-up:

The company added that it has a strong track record “for implementing some of the best privacy-protection measures in the industry.”

Anyway, the Kinect (much like the similar devices which will doubtless follow hot on its heels) isn’t inherently nasty… but it does have the capability to be misused in Orwellian ways. Which is why I’m always glad to see clever hacker types reverse-engineering drivers for proprietary hardware; knowledge is power.