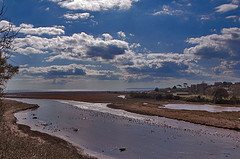 Hydroelectric power generation usually relies on harnessing the potential energy of water moving down from springs in high places, but there’s an as-yet unexploited source of power available at the estuaries where rivers flow into the sea. [via SlashDot; image by me’nthedogs]

In the inverse of the desalination process, energy is released as pure water mixes with salt water… and we may be nearing a point where technology will allow us to exploit that reaction and tap a new sustainable source of electricity:

Extracting clean, fresh water from salty water requires energy. The reverse process – mixing fresh water and salty water – releases energy. Physicists began exploring the idea of extracting energy from mixing fresh and salty waters, a process known as salination, in the 1970s. They found that the energy released by the world’s freshwater rivers as they flowed into salty oceans was comparable to “each river in the world ending at its mouth in a waterfall 225 meters [739 feet] high,” according to a 1974 research paper in the journal Science. But those who have chased the salination dream have collided with technological barriers.

Brogioli has developed a new approach to salination, a prototype cell that relies on two chunks of activated carbon, a porous carbon commonly used for water and air filtration. Once he jump starts the cell with electric power, all that is required to produce electricity are sources of fresh and salty water and a pump to keep the water flowing. When the separate streams of salty and fresh water mix, energy is released.

A typical cell would require about three dollars worth of activated carbon, and, given a steady flow of water, the cell could produce enough electricity to meet the needs of a small house. It’s the equivalent, in hydroelectric power, of running your appliances from a personal 100 meter (338 feet) high waterfall.

Brogioli maintains that his salinity cell could be ramped up faster than other salination approaches and could be made as affordable as solar power in a decade or so. He argues that any new renewable energy source is worth looking into, even if it is only a partial solution to our energy and environmental problems.

“There is no really clean energy source, and none of them can replace fossil fuels alone,” he said. “So, it’s a matter of compromise: find the best resource for a given region and use many different resources together.”

Thought I’d try my hand at io9-style headlines – just for fun, you understand. 🙂

But with valid reason, too – the perforated biomimic skyscraper-arcology design below has been named Dystopian Farm by its creator, Eric E Vergne. 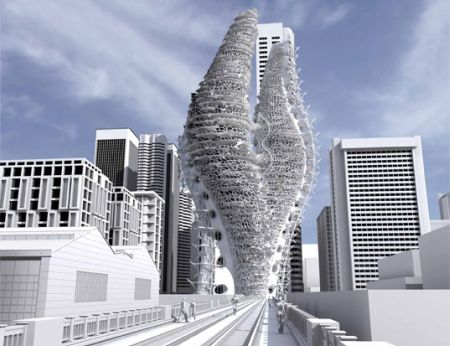 Designed for the Hudson Yard area of Manhattan, Eric Vergne’s Dystopian Farm aims to provide New York with a sustainable food source while creating a dynamic social space that integrates producers with consumers. Based upon the “material logic of plant mechanics”, the biomorphic skyscraper is modeled after the plant cells of ferns and provides space for farms, residential areas, and markets. These organic structures will harness systems such as airoponic watering, nutrient technology and controlled lighting and CO2 levels to meet the food demands of future populations.

Vergne’s design is one of many entries in this year’s Evolo Skyscraper Competition, so we can probably safely assume that it’ll never actually be built – which will either disappoint you or make you heave a sigh of relief.

But speculative architecture eventually feeds back into the buildings we end up living in, and the need for sustainable urban food sources is pretty unavoidable. I can think of worse things to clutter a skyline with… but Vergne might want to think about giving it a slightly less grim name should it come to erection time.