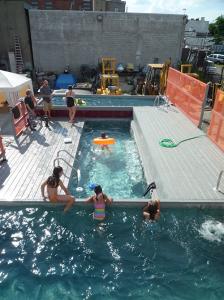 As regular readers will know, I get a kick out of stories about the reclamation of disused and abandoned urban spaces. BoingBoing flagged up a rather cute and apolitical example – an organisation called Macro-Sea that transforms defunct strip malls into community spaces, most notably by building public swimming pools out of industrial-sized dumpsters.

As Jocko and I continued our correspondence I quickly learned that Steve was right (not that I ever doubted him), the pool project was a small part of something much larger. Macro-Sea has been involved with a number of artists, architects and retailers across the country working to transform defunct strip malls. “By stripping and altering its [strip malls] common architectural features, adding community space and involvement, and carefully selecting and curating vendors and the space itself Macro-Sea hopes to create and promote a place for people to shop, meet, learn, and engage with one another.” Sounds like a good plan to me and I’ve seen it happen successfully before, in Sao Paulo, Brazil a few years ago.

This project is conceptually connected to Chairman Bruce’s squelettes, and to the theory of the Temporary Autonomous Zone. As cities expand, there will be more and more of these dead spaces scattered around, and I’d like to see people making imaginitive use of them rather than waiting for the authorities to scrape together the cash to build some sterile new development… or, more likely, a new mall to replace the old. [image borrowed from article at ReadyMade Magazine]