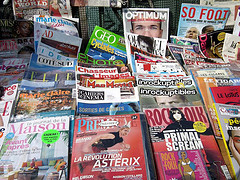 The Death-Of-Magazines debate seems to have gone off the boil in the genre fiction scene (albeit temporarily), but there’s still plenty of discussion – and innovation – going on elsewhere. Former Wired columnist and Japanophile Momus takes a look at the migration of magazines onto portable devices like the iPhone over in the Land of the Rising Sun:

Already, musician friends are thinking in terms of iPod apps the way they once might have thought of releasing albums on labels. Who needs a label when an app could be a worldwide delivery system for people interested in your music? Or how about keeping up with Japanese magazines? I’ve already mentioned Nakatree Viewer, a free app that lets you look at the paper ads for magazines that hang in Japanese subway cars.

Nakatree Viewer began as the ad sheets themselves (typically showing a modified version of the mag’s latest cover), then added pop-up QR codes allowing you to access some of the content of the magazines. Now there’s talk of the Viewer actually taking you to online versions of the magazines, either reduced versions (like Courrier Lite, a standalone application for one mag) or full ones.

At a time when magazines are dropping like flies, giving them a new distribution platform is giving them the chance of new life. Whether the iPhone is the ideal reading environment for magazines is another matter. I have a digital subscription to The Wire, but prefer to read it on my big computer, or on paper. But when Apple releases its iPhone-OS tablet computer — rumoured either for next month or early next year, depending on who you believe — who knows?

Meanwhile, Lifehacker flags up a web2.0 site called MagMe that puts full-resolution scans of magazines right into your web browser. While none of these examples are omega points for magazine survival, it’s plain to see that people are working to find solutions. The genre short fiction scene sadly lacks the money to invest in playing around with potentially viable solutions, but we can at least hope that one will come along soon enough for them not to die off entirely. [image by Diane S Murphy]

But talking of publishing models, and looping back to Momus’ comment about his musician friends thinking beyond the traditional record publication process, here’s an interesting reversal from the world of music: a record label that have signed a deal with a band [via TechDirt]. Yes, you read that right.

The release outlined a unique setup Blue Scholars have put together between Seattle’s Caffe Vita Coffee Co. and the excellent hip hop label Duck Down. Simply put, Caffe Vita is providing the cash flow, and they’re hiring Duck Down to run point on marketing.

Just another sign of what we’ve been saying for two years: the business is changing, artists have choice, and artists will find partners to help them get done what they need to — the mantra is no longer: “I’ve gotta get signed I’ve gotta get signed…”

Could this reversal of power work in book publishing? Consider a hypothetical author like Cory Doctorow, whose public profile gives him (or her) a lot of traction beyond the traditional book marketing channels; if they were offered a weak or creatively restrictive deal from their standing publisher (or, indeed, no deal at all) and decided to look around for alternatives, what small press wouldn’t jump at the opportunity offered by the chance to let that author publish the book they really want to write?

The author’s stature would reflect onto the small press and garner more media attention, enhancing its ability to shift units by lesser known authors; meanwhile, the author benefits from the experience and connections of the small press in the more traditional book marketing network, reducing the amount of leg-work required by comparison to a self-published (but already well-known) author trying to get the word out. It’s a potential synergy – and while there are plenty of details missing from that off-the-cuff idea, it doesn’t strike me as the most crazy scheme I’ve heard this week.

What do you think – can fiction publishing save itself by slimming down and becoming more flexible, or will consolidation, cost-cutting and rigid control be its saving grace?