Tian cites the recent cloning of the entire genome of a single bacterium, which took more than four years to complete and cost more than $40 million, as an example of the drawbacks of current technology. The new chip system would have reduced that to a small fraction of the time and expense, Tian says.

Gene synthesis involves a number of steps, including synthesis, purification, and assembly of oligonucleotides or oligos, short snippets of DNA, usually less than 50 base pairs. Each of these steps currently takes one to two days to complete. The new chip performs all three of these activities.

The chip itself has row upon row of tiny indentations, or wells. The biochemical equivalent of an inkjet printer shoots the desired DNA bases into each well. The bases assemble within the well and since it is a enzymatic reaction, harsh chemicals are not needed to release the DNA strand, as it done now, from the walls of the well.

“The chip basically combines the three steps into one, which can be completed in less than two days, and without all the labor currently needed,” Tian says. “Also, since the wells are so small, significantly smaller amounts of expensive chemicals are needed to run the reactions.”

Rudy Rucker has been ruminating on synthetic biology in the wake of a September essay in The New Yorker entitled “A Life Of Its Own”, which is well worth the half hour or so it’ll take to read. [image by ynse]

In response, Rucker has reposted a piece he wrote for Newsweek on the same subject back in 2007… and if you love Rucker’s ability to flip-flop from hard science to way-out West-Coast weirdness within the space of a few paragraphs (as I do), it’s a must-read. For example, here are Rucker’s thoughts about the biotech “grey goo”scenario:

What’s to stop a particularly virulent synthetic organism from eating everything on earth? My guess is that this could never happen. Every existing plant, animal, fungus and protozoan already aspires to world domination. There’s nothing more ruthless than viruses and bacteria—and they’ve been practicing for a very long time.

The fact that the synthetic organisms are likely to have simplified Tinkertoy DNA doesn’t necessarily mean they’re going to be faster and better. It’s more likely that they’ll be dumber and less adaptable. I have a mental image of germ-size MIT nerds putting on gangsta clothes and venturing into alleys to try some rough stuff. And then they meet up with the homies who’ve been keeping it real for a billion years or so.

And if that’s a bit too serious for you, hands up who’d love to live in this future:

Of course, people will want to start tweaking their own bodies. Initially we’ll go for enhanced health, strength and mental stability, perhaps accelerating the pace of evolution in a benign way.

But, feckless creatures that we are, we may cast caution to the winds. Why would starlets settle for breast implants when they can grow supplementary mammaries? Hipsters will install living tattoo colonies of algae under their skin. Punk rockers can get a shocking dog-collar effect by grafting on a spiky necklace of extra fingers with colored nails. Or what about giving one of your fingers a treelike architecture? Work ten two-way branchings into each tapering fingerlet of this special finger, and you’ll have a thousand or so fingertips, with the fine touch of a sea anemone. 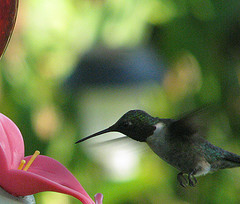 Wired does an excellent job of focusing on a day-to-day aspect of an imminently transformative technology. Much is spoken of the coming biotech revolution, but industrial designers like Tuur Van Balen focus on the how biotechnology will present itself at the most basic level:

The 1s and 0s of software live in shiny metals shielded by colourful plastics; biological data lurks in dampness, in pipettes and test tubes. Hacking is about the culture of garages and workshops; DIY bio lives somewhere between the kitchen and the garden. You need mixing bowls and hygiene, beakers and taps. Every article about DIY bio seems to mention a salad-spinner. This isn’t the heavy macho culture of Survival Research Labs and steampunk. We’re moving from BarCamps to Tupperware parties.

Continuing with the theme of biomimetics: artificial technology is gradually merging with natural biology at both ends. Engineers borrow from nature to create new gadgets whilst biotechnologists seek to alter nature to meet human ends. 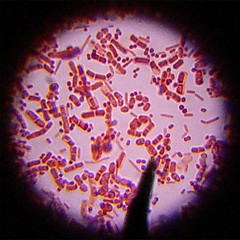 There was a great segment on NPR’s Science Friday last, well, Friday.  It dealt with the potential pitfalls of synthetic biology – a brand new field most recently brought into the headlines by Craig Venter’s creation of synthetic bacterial DNA.  The topics ranged widely, from cheap sci-fi thriller plot of rogue scientist creates killer virus in lab, to religious throwbacks to Mary Shelley invoking man-plays-God ideas, with several in between.  One of the guests was a bioengineer, the other was an anthropologist, which gave a good mix of insight into the various problems.  And interesting mention was of a machine that could basically print out DNA from a stored library of DNA structures.  A crude form already exists, which prompted me to think of a question that wasn’t tussled with – if we can print up DNA in the future like we print up documents now, will DNA testing go the way of photoshopped graphics, where people could be framed for crimes by printing and planting DNA evidence at crime scenes?