Last month I pondered the extent to which the Arab Spring and Occupy Everything are socially-driven acts of creative destruction. Creative destruction is defined as a “process of industrial mutation that incessantly revolutionizes the economic structure from within, incessantly destroying the old one, incessantly creating a new one.” The mutation, in this case, is reactionary responses to established interests, mostly driven by or assisted by social media. Governments and power structures are falling, but the replacements aren’t immediately ready in the wings. END_OF_DOCUMENT_TOKEN_TO_BE_REPLACED

Here’s an interesting minor story which throws a light on matters far larger: someone discovers a software glitch in casino slot machines that allows him to win big money without any tampering, and he does exactly that, to the alleged tune of US$1.4million. Cue his arrest and trial for “650 felony counts of theft, criminal conspiracy, computer trespassing and other charges” [via TechDirt].

Now, for a start, I have very little sympathy for casinos in general, and that may be colouring my judgement somewhat. But as far as I’m concerned, this guy has done nothing more illegal than picking up money he saw dropped on the floor. Sure, the highest moral ground might have been to return the money to its rightful owners… but when its rightful owners already have a great deal of other money (obtained by exploiting the statistical illiteracy and flawed psychology of the average person), well, let’s just say my cup of sympathy runneth not over.

Moral arguments aside, though, this story is indicative of a common phenomenon wherein the system encourages us to pillory those who take advantage of its flaws but does little to address the flaws themselves. Compare with the current protests here in the UK over big-ticket tax evaders: lots of public shaming of the evaders themselves (which I don’t think is necessarily a bad thing), but comparatively little pushing for fixing the perfectly legitimate (if morally dubious) loopholes that allow it to happen.

The cynic in me suspects a lot of our ire stems from a gut feeling best summed up as “why not me?”, and as such we want to punish the transgressors for getting what we didn’t (or avoiding what we couldn’t). Our discontent is misdirected, and the underlying problem goes unfixed… which ends up serving the interests of those best placed to take advantage of it, who are usually those already holding a handful of aces.

We try to treat the symptoms, but the disease reigns unchecked.

Here’s a really interesting thought-experiment from Adam Rothstein, riffing off the no-fee-no-fire-brigade story and the receipt-for-your-taxes idea. I’ll let him explain rather than attempt to paraphrase:

What if after seeing this receipt, taxpayers were allowed to shift where their taxes went? Say, less Pell grants, and more to the war in Afghanistan, if that was their priority. Or less war, and more highways. Of course this would affect their service. The service only gets what the individual public thinks it deserves from their contribution to the tax coffers. It would be easier to go all Henry Thoreau on a war a hemisphere away then it would on, say, your local fire service, because there are fewer people contributing to your local fire bureau than paying national taxes, and you’d see the effect of the latter right away, the former only later. But hey, open it up. Let people pay their share of what they think it important. Let’s think about what would happen, if people could actually control where the money was going.

Other than finally letting individuals control their tax dollars, what this would eventually create is a massive, cybernetic feedback loop. Let’s say you opened up a website with UI controls, so you could adjust your proportional tax payment anytime you wanted, adjustable down to hourly segments of your fiscal year total. (I am assuming you must still pay your full total, you can just allocate the percentages. Otherwise, everyone would obviously opt to pay nothing at all.) And this site updates. So after it first launches, we see (and I am just guessing here) payment for education and arts decrease, and military spending increases. After a few hours of people allocating their own taxes, education and arts are almost at zero. But then what happens as people see these changes? Maybe someone who originally allocated 75% military/25% education, on seeing education spending slide nationally to nothing, decides to allocate 100% education to make up for the difference. How many people do this? Enough to counter the childless militants? What sort of equilibrium is reached? Is an equilibrium reached?

Now imagine, after they open up the API of this system (naturally), third-party algorithms are introduced. Want to help the budget reach 25% for education nationally? Install this add-on, and it will auto-adjust you and everyone else using the add-on in a unified front to make this goal a reality (while protecting your personal data, of course). Or maybe you set it to automatically devote up to 100% of your individual taxes to education, unless highways dip below 5%, and then it re-figures your totals according to your preference. Or, download the Democratic Party algorithm, which will automatically adjust your percentages to match the national tax distribution platform of the party. Download the Support our Troops algorithm, which helps the Veterans and Military budgets maintain a certain consistent ratio to the overall budget depending on how many troops are currently on active duty. Pledge to Support the Dollar, by downloading the FOMC algorithm that will adjust internal infrastructure spending and national debt spending in such a way as to drive the strength of the dollar world-wide. How about an algorithm that scans the news for stories of political scandal, reducing the money allocated to congressional salaries every time there is another ethics violation? Too many fires in your district last month? The Google Map Fire Layer-aware algorithm will automatically up your fire services percentage by an appropriate amount.

Now what would be REALLY REALLY interesting: what sort of equilibrium is achieved, and how far off is it the current balance as it now, without this sci-fi direct democracy scheme? After all the algorithms are factored in, and all the feedback to the results of the algorithms are calculated and re-factored… are we actually any different than where we are now? Is our national desired budget, summed from all the diverse opinion about where we ought to be spending money, really any different from reality? If we let one person tweak the budget, they’d do all sorts of different things. But if everyone’s opinion and rate of pay were weighted together, I’d say it’s a fair bet that we’d end up exactly where we are.

Is it possible that as bankrupt and backwards as our democracy is, that it actually functions perfectly at doing what it is supposed to do? This function: to obfuscate and abstract our own lack of knowledge and ability, to direct our attention away from our responsibility for our own egos. And is it possible that the government, by echoing the non-sensical desires and demands of a populace that is as fickle as a television programming schedule, is already the representative compass of a society that is ready and willing to sprint directly towards oblivion? This society that would rather wage war across the globe than put out the fires in our neighbors homes, and fix the gas lines underneath our own feet.

Provocative stuff, and no mistake; much like Rothstein, I’d love to see the results of an experimental run of a system like this, though I’m perhaps a trifle more optimistic about the results we might see, especially if there were a good degree of local granularity involved. 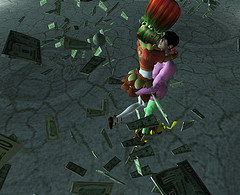 No one but their creators can be entirely sure of how much money is sloshing around in the economies of MMOGs and metaverses like World of Warcraft and Second Life, but given the sheer number of regular participants in both (and the brisk markets for in-game items using real world money) it’s certainly not pocket change. [image by Ravenelle]

That’s probably got a lot to do with why the United States IRS is being advised to start taxing virtual economies:

“Economic activities associated with virtual worlds may present an emerging area of noncompliance, in part, because the IRS has not issued guidance about whether and how taxpayers should report such activities,” Olson wrote in her report. She points out that almost all income is subject to tax—even prizes, winnings, and barter exchange. She also acknowledges, however, that tracking and reconstructing so many tiny transactions would be a huge burden, and that attempting to place a value on virtual transaction could present serious challenges.

No kidding; brief and silly scares about terrorist money laundering aside, the potential of black and grey economies lurking in the metaverse is pretty obvious. But considering how easy it seems to be for the meatspace megarich to slip through the net, is this going to prove too tough a nut for the IRS to crack?

For example, when does the money become taxable – when it leaves the virtual space in question, or as soon as it is earned by a citizen? What happens when exchanges operate between virtual worlds? Will the new offshores be based on server farms as opposed to Caribbean islands?