One of the first applications of avatar therapy was in treating social anxiety disorder, a crippling shyness that can confine people to their homes. James Herbert, head of the anxiety treatment and research programme at Drexel University in Philadelphia, Pennsylvania, was among the first wave of researchers to investigate avatar therapy. Encouragingly, clients generally rated the treatment highly, though there were exceptions. “Some patients and therapists reported frustration with not being able to see the individual’s face,” he says, and sometimes technical difficulties interrupted the sessions.

Avatar therapy has also helped people with phobias. In real life, the usual treatment is to gradually expose people to the source of their fear, but this can sometimes be difficult. An avatar therapist can introduce the phobia source while remaining in complete control, scaling the experience up or down according to the client’s reaction.

In fact, many of the conditions treated by face-to-face talk therapy can also be treated virtually, including depression and anxiety. Avatar therapy is proving useful for more diverse conditions too, such as traumatic brain injury, schizophrenia and Asperger’s syndrome.

Yet again, the line between science fiction and real life gets thinner, and another of our stories gains a slightly prophetic edge.  Richard Kadrey’s Twitter stream alerted me to an article at The Guardian about a therapeutic process whereby traumatic memories can be rewritten or edited in order to make them less debilitating… without the use of drugs. I’m no psychologist, but it reminds me a little bit of the aversion therapy approach:

… 20 volunteers sat in front of a computer screen on which squares of different colours appeared. When blue squares flashed on the screen, they received an electric shock to the wrist.

The next day, the volunteers were shown blue squares again to reactivate the memory. Sensors placed on their skin showed that the images caused the participants to sweat as their stress levels rose.

To erase the memory that linked blue squares with pain, the volunteers were put through “extinction training” which involved flashing blue squares on the screen without the accompanying electrical shocks.

When the volunteers were retested a day later, the fear associated with the squares had gone, but only in participants whose memories were rewritten soon after their fear was reactivated…

In other words, expose the subject to the traumatic memory trigger minus the trauma soon enough after the event, and you can prevent lasting problems. Perhaps this sort of process would be useful for lessening the impact of post-traumatic stress in military personnel on active service? Either which way, it’s reminiscent of Marissa Lingen’s “Erasing The Map”, published here back in February of this year… though Marissa’s story saw memories being deleted rather than edited 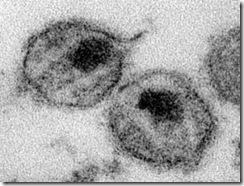 A new type of "combination therapy" is being hailed by researchers as being an effective cure for the HIV virus. I’m sure I’ve read similar headlines before, but given recent advances in biotechnology, I’ve a little more hope of this being the real deal. However, although I’m no biologist, I’m not entirely sure "cure" is the right word – the article mentions that the therapy "prevents HIV from mutating and spreading", which doesn’t sound quite the same as actually eradicating it from the host body. Still, it’s satisfying to think that perhaps the most frightening disease of the Twentieth Century may soon be little more than a bad memory. [Via OurTechnologicalFuture] [Image from ScienceDaily article, credited to CDC/Dr. A. Harrison; Dr. P. Feorino]