As the 3D-printing business strives to make itself stand out as a unique and exciting manufacturing method, some pretty weird and wonderful ideas are coming down the pipe.

Via Fabbaloo we discover an outfit called Fluid Forms who offer you the opportunity to buy your own “Earth Brooch” – a 3cm square solid silver jewellery piece that is cast as a miniature reproduction of the geological topography of any section of the Earth’s surface (or presumably that of any other planet which is sufficiently well mapped) that you choose. [image ganked from Fluid Forms under Fair Use terms; contact for take-down if required] 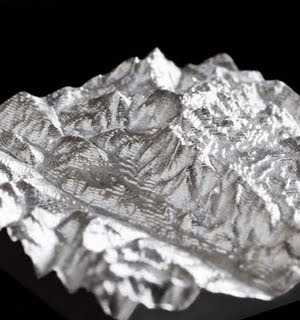 Leaving aside the manufacturing process (which would have been considerably more difficult even just a few years ago), these are still rather intriguing little trinkets – the sort of thing I’d expect to find in a Karl Schroeder novel. Imagine a society where such brooches were a commonplace indicator of status and rank, the label of the (literally) landed gentry – the legitimacy of your claim of ownership over a chunk of land (be it physical or virtual) embodied in a unique badge issued by the central governing authority…

And once you start thinking of 3D printing in these terms, other weird ideas for one-off jewellery and costume items leap to mind. Expectant mothers could transform their latest fetal scans into a brooch that replicates their unborn child in silver… poets could literally wear their hearts on their sleeves… and, moving away from the more expensive materials, fancy dress parties could be full of people wearing life-accurate masks of those celebrities who had chosen to monetize their face in the most literal way possible…