About 50 years ago Stanley Milgram conducted controversial experiments showing that seemingly normal people, when ordered by an authority figure, were willing to administer what they thought were painful electric shocks. Now the flagship journal of the American Psychology Association carries a paper claiming that Milgram’s results have been replicated.

Jerry M. Burger, PhD [at Santa Clara U.] … found that compliance rates in the replication were only slightly lower than those found by Milgram. And, like Milgram, he found no difference in the rates of obedience between men and women.

…”People learning about Milgram’s work often wonder whether results would be any different today,” said Burger, a professor at Santa Clara University. “Many point to the lessons of the Holocaust and argue that there is greater societal awareness of the dangers of blind obedience. But what I found is the same situational factors that affected obedience in Milgram’s experiments still operate today.”

Burger’s participants were 29 men and 41 women. His experiment was done in 2007 but the results have just been officially published. Milgram’s experiments showed that 79% of participants would administer “shocks” even after their “victims” protested; Burger found an obedience rate of 70%. 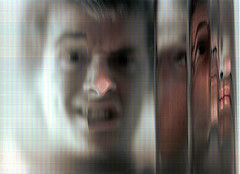 It’s amazing what you can find on the internet – should you have a use for it, a ‘classic’ handbook manual of psychological torture techniques, written by leading shrinks and psychologists in the early sixties, is just waiting for you to download it. I have yet to check through and see whether soap operas and bureaucracy made the cut … but given the age of the document, I think we can assume that YouTube lip-sync videos aren’t mentioned. [Image by lunchtimemama]