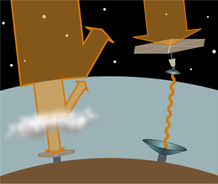 Toshiba has announced a 200 kilowatt nuclear generator that can power a small block or large apartment building. At 20*6 feet large it can fit in a basement.

It’s designed, like pebble bed reactors, to not need mechanical parts to keep it safe.

This is a potentially disruptive piece of engineering. For one, it decentralizes power generation. It will allow power generation to be installed in remote locations throughout the world.