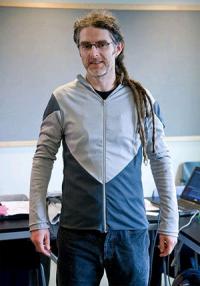 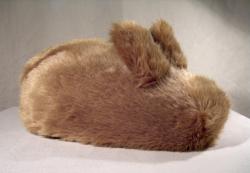 In an effort to deepen the experience of humans interacting with robots, Steve Yohanan has been concentrating on the largely-neglected fifth sense of touch. The Haptic Creature is a robot rabbit that only communicates through a haptic interface – in other words, it responds to touch with movement. [image borrowed from NewScientist article]

Yohanan and others believe that haptics are a faster route to creating an emotional response … I wonder if the guys at Ai Robotics have included haptics in their soon-to-be-launched “Perfect Woman” robots? 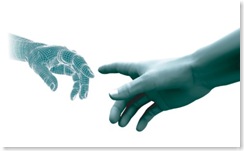 Michael Anissimov takes a look at haptics – the name for interfaces based on the sense of touch. Largely ignored so far in favour of video and audio (which are much simpler and cheaper to implement), haptic technology is the logical next step in immersive virtual experiences; a haptic suit could simulate real tactile contact in a virtual world. [Image borrowed from Sensory Motor Performance Program]

As Michael points out, the sex industry will be one of the first to take up on this technology (as it did with video, and the internet itself), but once the price drops to within the reach of the average consumer, your home games console will support haptics, as well as most MMOs. Meanwhile, the development will probably be driven by potential military applications … but I doubt it’ll be long before we’re all getting our Lawnmower Man on.

What would you use haptics for? And where would you draw the line?