Step aside, space elevator evangelists – here’s an idea for joining the earth’s surface to space that’s much simpler, cheaper and safer than a big ribbon of carbon nanotubes.

A team of Canadian researchers have proposed a hollow tower constructed from the inflatable tubular modules that are used in some modern spacecraft, which – if built on top of a suitable mountain – could reach 20 kilometers above the Earth’s surface and act as a staging point for space launches… or a tourist destination with much lower risks and costs than suborbital rockets.

The team envisages assembling the structure from a series of modules constructed from Kevlar-polyethylene composite tubes made rigid by inflating them with a lightweight gas such as helium. To test the idea, they built a 7-metre scale model made up of six modules (see image). Each module was built out of three laminated polyethylene tubes 8 centimetres in diameter, mounted around circular spacers and inflated with air.

To stay upright and withstand winds, full-scale structures would require gyroscopes and active stabilisation systems in each module. The team modelled a 15-kilometre tower made up of 100 modules, each one 150 metres tall and 230 metres in diameter, built from inflatable tubes 2 metres across. Quine estimates it would weigh about 800,000 tonnes when pressurised – around twice the weight of the world’s largest supertanker.

Of course, the caveat is that this is just a theory at the moment – but it at least has the merits of being based entirely on existing technology. It seems that inflating things to reach space is quite the fashion at the moment… 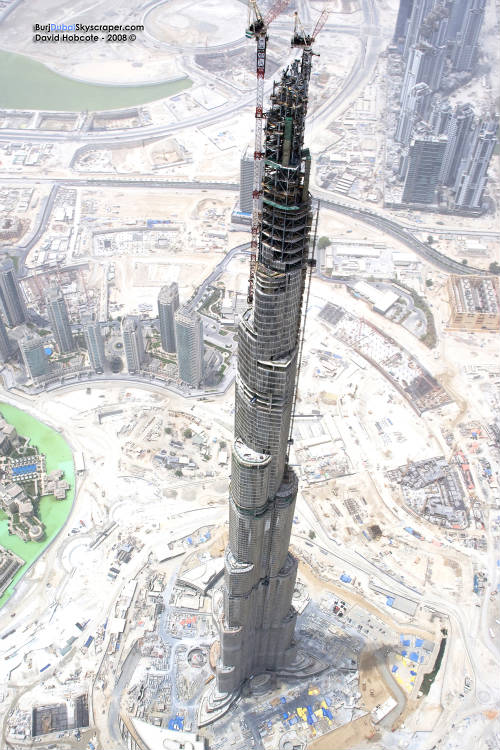 The Burj Dubai, soon-to-be-completed tallest building in the world. [via Phred Serenissima; image by David Hebcote, sourced from Gizmodo]