If you spend any amount of time straining through global news and pop culture, you’ll probably have had a similar sense of unseen patterns waiting to be discovered. But, Sven asks, what exactly occurs the moment before trend recognition? END_OF_DOCUMENT_TOKEN_TO_BE_REPLACED 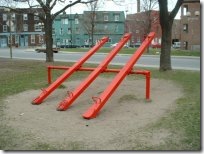 Being the sort of well-informed netizens you are, I expect you’re familiar with Malcom Gladwell’s “Tipping Point” hypothesis, widely believed to be the cutting-edge theory for predicting how trends, fads and fashions propagate. [Image from Wikipedia]

According to Gladwell, fashions are started by “Influentials” – highly visible and well-connected individuals who others look to for the next big thing.

According to Duncan Watts, however, the Tipping Point is so much baloney:

“It just doesn’t work,” Watts says […] “A rare bunch of cool people just don’t have that power. And when you test the way marketers say the world works, it falls apart. There’s no there there.”

And this is not, he argues, mere academic whimsy. He has developed a new technique for propagating ads virally, which can double or even quadruple the reach of an ordinary online campaign by harnessing the pass-around power of everyday people–and ignoring Influentials altogether.

Of course, Watts has his rival theory to promote – he’s not telling us this out of some philanthropic urge. But the point is that the business of marketing is probably where we’ll see the next big breakthroughs in understanding human communication as a system.

How the results will be used remains to be seen, of course. [Via The Daily Swarm]