Almost exactly five months ago, I had to pass on the news that writer, UFOlogist and former Futurismic columnist Mac Tonnies had been found dead in his apartment of natural causes. While we weren’t astonishingly close, I always enjoyed Mac’s outlook on the universe he found himself inhabiting, and I miss our communications, brief as they often were. [image borrowed from UFOMystic]

For such a reclusive and quiet-seeming guy, Mac had a lot of friends on the internet – y’know, real friends, the type that really care about you beyond your next blog post – and I’m pleased to see that some of them are running a tribute site for material relating to Mac and his work, and archiving and collecting his internet outpourings.

Regardless of what you may think of his theories (and believe me, I thought some of them were nothing short of bat-shit weird), Mac Tonnies was one of the good guys, and the world is a poorer place without him. 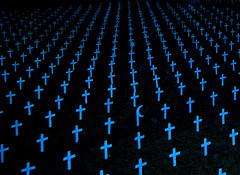