We all know that the web and social media are useful things for authors, enabling them to keep in touch with each other and their fans and – when used inventively – add some buzz and cachet to a newly published book.

But – as with all things – there’s a dark side, and recent events have gotten me wondering whether the unprecedented level of access we have to the creators of our favourite cultural currency isn’t breeding a sense of entitlement above and beyond the appropriate. The trigger was this photo on Warren Ellis’ blog, showing a note written to comics maven Brian Michael Bendis from a disgruntled fan who’d not found him signing books when he expected him to be: 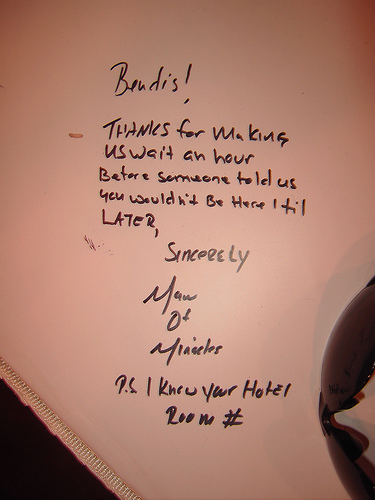 Creepy and threatening – you can see why Ellis isn’t keen on doing convention appearances and signings (though woe betide the fan who hassled a cane-wielding Ellis in need of another Red Bull and nicotine fix).

Now, this sort of behaviour is hardly new, and as pointed out in the comments thread the root of the word “fan” is “fanatic”. But authors especially seem newly exposed by social media, because they’ve always been one of the less public types of artist – writers historically do not “perform” in public in the same way as musicians, for example, and would have been protected from a lot of the weirder communications from the outside world by having their publisher as an intermediary.

But not so much these days – look at the recent wave of bitching from George R R Martin’s fans when they discovered the next instalment of his current series would be delayed. You’d think that die-hard fans would be the first to sympathise with a creator’s need for a life beyond their work, but there’s a vocal minority who are anything but. As Scalzi points out, such people are fools – but the web has made them fools with metaphorical megaphones and your home address.

A related phenomenon seems to be arising on review and discussion blogs, something that Larry of OF Blog of the Fallen has labelled “The New Tribalism” – a situation where groups of fans with closely related passions fall into a kind of groupthink. This has its upsides – it’s that sense of tribe that motivates many fans in the first place, and there’s nothing wrong with discussing art you love with others who appreciate the same material – but there are downsides too, which manifest themselves as vocal disapproval of voices from outside the tribe (or occasionally within) who dare to criticise the tribe’s focus of interest.

This isn’t new either – as any member of any subculture anywhere will surely agree – but again the mobility and power of the phenomenon is amplified by the web. Debate around cultural opinions is a good thing, but mob psychology and the web’s potential for anonymity seems to be an open invitation to be taken to task for daring to have a different opinion to someone else.

Some of my concerns are professional in nature: I advise my clients about the the benefits of a strong web presence, and it’s almost shaming to have to confess that there’s this negative aspect to it. That said, I still hold that it’s worth the risks – why let a few bad apples spoil the barrel for everyone? Writers like Ellis and Scalzi have developed good tactics for dealing with trolling and tribalism; the primary component seems to be developing a thicker skin, though a strong sense of personal space and practiced rhetorical chops seem to be pretty useful as well.

But there’s a more Futurismic edge to it all as well, because it feels safe to assume that web-based creator-consumer relations are likely to become more prevalent as time goes by. As such, it’s not impossible to image a fandom with similar clout to the fabled Anonymous: what might said flashmob do in response to criticism of their totem? As the barriers between physical and informational realities become increasingly permeable, comment-thread flamewars and denial-of-service attacks would be just the start. Vernor Vinge’s Rainbows End features warring fandoms battling it out in augmented reality, with the action spilling out into damage to property and people; the more I think about it, the more plausible it becomes.

After all, we’re prone to going to war over ideologies; given the decline of interest in religion and politics among the younger and more net-native generations, it’s easy to see cultural affiliations taking their place. These culture-mobs could easily be great forces for fun and creativity, but the potential for the opposite to occur can’t be brushed aside. How might Brighton have looked had the mods and the rockers had mobile phones with web access to coordinate with?

You’ve heard of patent-trolling, right? The process whereby one business finds another company that has protected an invention as a trade secret, then reverse engineers that secret, patents it and sues the original inventors?

Well, those lovely folk at Halliburton have attempted to patent that patent-trolling process. This is surely where zen, irony and corporate chutzpah meet.