Just a quick update for hardcore spacegeeks and aspiring Bond villains: remember TubeSat, the company that would sell you a build-your-own-satellite kit with your launch-to-orbit fee included in the ticket price? Well, they’re doing their first suborbital test flights next month, and business seems to be good. Here’s a satisfied customer justifying the financial layout:

“$8,000? That’s just the price of a cool midlife crisis,” says Alex “Sandy” Antunes, who bought one of the kits for a project that will launch on one of earliest flights. “You could buy a motorcycle or you could launch a satellite. What would you rather do?”

It’s a tough decision, but I think the satellite gets my vote. So book your TubeSat kit now to avoid the rush… after all, you’ll want to get your bird aloft before Warren Ellis’ death-ray sat scours the planet of all life larger than the common housefly. Don’t say you weren’t warned. 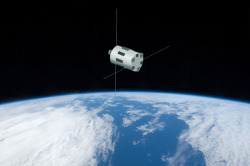 So, d’you remember us mentioning the TubeSat company back in summer? Y’know, the outfit from whom you can buy a one-shot tubular satellite from for only US$8,000 – the people at H+ Magazine gave them a good grilling last month, too.

Well, Warren Ellis certainly noticed, and he’s now in this month’s issue of Wired UK, begging for money with which to launch his own death ray.

So if you fancy arming the High Curmudgeon of comics with Terrible Implements of Space-borne Pain and Death, you know what to do – though I dare say he’d just as rather you bought some of his books. If, however, you’d rather fund a slightly more peaceful TubeSat deployment, you might be interested in taking a look at Drake Pool’s “Space Now” Kickstarter project.

Drake emailed earlier this week to say that he spotted the TubeSat story here at Futurismic a few months back, and it inspired him to get a project together. Not surprisingly, he can’t just rustle up eight grand out of nowhere, so he’s doing a crowdsourced microfunding drive whereby you can buy small chunks of the available payload space. And he doesn’t really mind what you do with it, though he suggests using the capability to broadcast a signal to a particular geographical section of the planet:

… in polar orbit the satellite will cover a vast amount of the earth’s surface. This means you will be able to broadcast your message to a geographically relevant region of the planet. With the power of mathematics, we can determine where the satellite will be at a given time. Think of the possibilities!

I’m sure there is hundreds of things you can do with this. I can’t wait to see.

I’m sure playing 80s speed metal at people who aren’t expecting it qualifies as a “cruel and unusual punishment”in some countries… but hey, that’s your lookout. Drake suggests you could also send very small objects up on the satellite, so if there’s somethign lurking around the house (or even your body) that you feel deserves to go out in the ultimate blaze of glory and burn up on re-entry into the Earth’s atmosphere, dig it out and get clicking.

Whether you decide to invest or not, kudos to Drake for going that one step further than the rest of us who just thought “wow, what could you do with one of those?” and forgot about it. That’s the entreprenurial spirit, right there. 🙂