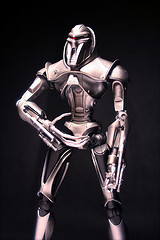 No, seriously. The UN invited some of the cast and crew behind successful TV sf series Battlestar Galactica to the United Nations Economic and Social Council to discuss the similarities between the show’s storylines and real-life politics in a changing world:

Some of the thematic parallels seemed a bit forced, but the show’s scenes about human rights and terrorism fit particularly well. UN officials continually mentioned eerie echoes of the real world in “Battlestar.”

“I’ve heard these words from people before, and they weren’t actors,” said Robert Orr, a UN assistant secretary-general for policy planning. He singled out the “Battlestar” story arc on New Caprica that deals with issues of insurgency and terrorism, and thanked Moore and Eick for creating a show which gave people cause to think about such issues.

Moore said that he continually tried to use “Battlestar” to flip familiar situations and put the audience in uncomfortable spots — such as creating situations where humans resorted to suicide bombings and torture against the Cylons, the supposed “villains” at the start of the show who gradually become more sympathetic.

Quite how much impact this will have on UN policy (if any) remains to be seen, but it’s refreshing to see people taking science fiction seriously for its deep themes rather than snarking about its surface tropes. [image by chanchan222]