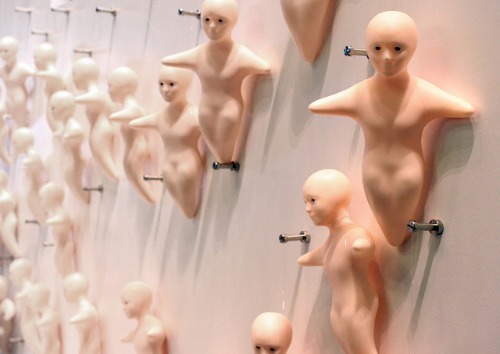 Thanks to regular reader Sarah Brand for the tip-off on this one; Tokyo-based entertainment company Kokoro has been uploading videos of Actroid F, their android actress, and they’re simultaneously impressive and creepy. Voila:

See what I mean? I’ve spoken to hotel desk staff and shop assistants less realistic than that! (Which probably says a lot about my shopping and travel habits; so it goes.)

[ Bonus aside for the rock fans in the readership, who may have noticed the album-name allusion in the title of this post: maybe the not-really-entirely-Kyuss-actually cash-in reformation could get an android stand-in for Josh Homme? I’d be more interested in catching the shows if they did, to be honest… ]

2010 is shaping up to be a busy year in robotics, if the number of robo-related posts flowing through my RSS pipes are anything to go by. Here are just a handful of ’em for you…

First of all, nascent sexbot company TrueCompanion debuted Roxxxy [see image] at the AVN Adult Entertainment Expo at Vegas just after the new year [via SlashDot and Technovelgy]:

“She can’t vacuum, she can’t cook but she can do almost anything else if you know what I mean,” TrueCompanion’s Douglas Hines said while introducing AFP to Roxxxy.

“She’s a companion. She has a personality. She hears you. She listens to you. She speaks. She feels your touch. She goes to sleep. We are trying to replicate a personality of a person.”

Roxxxy stands five feet, seven inches tall, weighs 120 pounds, “has a full C cup and is ready for action,” according to Hines, who was an artificial intelligence engineer at Bell Labs before starting TrueCompanion.

Roxxxy comes with five personalities. Wild Wendy is outgoing and adventurous, while Frigid Farrah is reserved and shy.

There is a young naive personality along with a Mature Martha that Hines described as having a “matriarchal kind of caring.” S & M Susan is geared for more adventurous types.

Somehow, I find Hines a bit more creepy than Roxxxy. And if you find the notion of people building sexbots a little odd, wait until you hear Hines’ motivations for creating her…

Inspiration for the sex robot sprang from the September 11, 2001 attacks, when planes crashed into the World Trade Center in New York City, the Pentagon and an empty field in Pennsylvania.

“I had a friend who passed away in 9/11,” Hines said. “I promised myself I would create a program to store his personality, and that became the foundation for Roxxxy True Companion.”

Meanwhile, South Korean roboticists are focussing on more, ah, domestic applications as they work on building a walking robot housemaid:

Mahru-Z has a human-like body including a rotating head, arms, legs and six fingers plus three-dimensional vision to recognise chores that need to be tackled, media reports said Monday.

“The most distinctive strength of Mahru-Z is its visual ability to observe objects, recognise the tasks needed to be completed, and execute them,” You Bum-Jae, head of the cognitive robot centre at the Korea Institute of Science and Technology, told the Korea Times.

“It recognises people, can turn on microwave ovens, washing machines and toasters, and also pick up sandwiches, cups and whatever else it senses as objects.”

Ideal for the frat-house with money to spare, then. But careful programming is of the essence if we’re to live side by side with robots, as is a legal framework that accomodates the ethical and social grey areas that our mechanical servants will bring with them [via Cheryl Morgan]:

Driverless cars may be one of the more gentle uses of robotics but even they will need a host of new rules written to help them fit smoothly into our society.

Take questions of insurance, for example – in the event of an accident, who do you hold responsible? If the crash involves an artificially intelligent robot, do you blame its creator, or the robot that can think for itself?

It’s a problem that would apply to any autonomous robot large enough to do accidental or erroneous damage to humans or property, according to Sharkey. “[It’s] going to be the same with any robot in the public domain that’s independent. Who’s accountable? Who’s responsible?”

“There could be a very long chain of accountability,” he added. “The manufacturer, the person who deployed it, the person who’s using it currently. If I’m irresponsible with my autonomous car is it my fault? That’s one of the problems with it.”

And then there are the robots that are actually designed to damage people on purpose – there’s a whole raft of ethical OMGWTF wrapped up with military robotics (as we’ve discussed here before):

While robot fighters may remain on every military’s must-have list, the structures needed to define how such armed and potentially deadly autonomous agents should be used and not used are not yet in place.

“This is not science fiction anymore,” said Ron Chrisley, professor of philosophy at Sussex University. “This is really a pressing question – because in particular the US military is building more and more artificial systems that are going to be responsible for in some sense deciding whether or not to bomb co-ordinates or something. Now we need to get ethical principles in place to say, well, even if this system is in some sense responsible that doesn’t mean that this other system – namely the people who deployed it – are not also responsible.”

“I would hope that in the very near future a very rich field of machine ethics, machine-human ethics starts developing,” he added.

Looks like not everyone has heard about Roxxxy, however:

“I’m surprised frankly that the sex industry hasn’t yet cottoned on to robotics,” the University of the West of England’s Winfield said.

“For better or for worse, whatever your opinion on the subject, it is true that the sex industry has been responsible for a good deal of innovation on the internet, in terms of web technologies and so on,” he added.

Sex with robots is inevitable, in Sheffield University’s Sharkey’s view. Marriage, however, is not, according to another AI researcher, David Levy.

“I don’t agree with him that people will marry robots, except slightly perverted people. I can’t imagine you’d want to marry it but certainly robots will be used in the sex industry, there’s no doubt about that. And you could think of that as dystopian – I would. But people have sex with dolls, so you just make the doll move a little bit and you’ve got a robot.“

Levy’s theories sound a little weird at first, but he’s very persuasive – not in a sleazy way, but in the manner of someone who really seems to have thought things through. Only time will tell whether he’s right, of course… but I wouldn’t bet against him at the moment, for whatever that’s worth.

Last but not least, the Uncanny Valley of the title is a well-known buzz-phrase, at least among the geeky sort of circles that read this site… but it may also be a completely bankrupt theory. There’s certainly no research that supports it, according to Popular Mechanics:

Despite its fame, or because of it, the uncanny valley is one of the most misunderstood and untested theories in robotics. While researching this month’s cover story […] about the challenges facing those who design social robots, we expected to spend weeks sifting through an exhaustive supply of data related to the uncanny valley—data that anchors the pervasive, but only loosely quantified sense of dread associated with robots. Instead, we found a theory in disarray. The uncanny valley is both surprisingly complex and, as a shorthand for anything related to robots, nearly useless.

I know that I can vouch for the occasional creepiness of humanoid robots (not to mention metaverse avatars, which can be alarmingly ultrarealistic), but I guess it’s a tricky thing to quantify and measure… because it seems to be a predominantly remote effect:

According to all of the roboticists and computer scientists we interviewed, the uncanny is in short supply during face-to-face contact with robots. Two of the robots that inspire the most terror—and accompanying YouTube comments—are Osaka University’s CB2, a child-like, gray-skinned robot, and KOBIAN, Waseda University’s hyper-expressive humanoid. In person, no one rejected the robots. No one screamed and threw chairs at them, or smiled politely and slipped out to report lingering feelings of abject horror. In one case, a local Japanese newspaper tried to force the issue, bringing a group of seniors to visit the full-lipped, almost impossibly creepy-looking KOBIAN. One senior nearly cried, claiming that she felt like the robot truly understood her. A previously skeptical journalist wound up smiling and cuddling with the ominous little CB2. The only exception was a princess from Thailand, who couldn’t quite bring herself to help CB2 to its robotic feet.

Royalty notwithstanding, the uncanny effect appears to be an incredibly specific and specialized phenomenon: It seems to happen, when it does, remotely. In person, the uncanny vanishes. There’s nothing in the way of peer-reviewed evidence to support this, but then, there’s almost nothing to confirm the uncanny effect’s existence in the first place. As an unsupported theory that has morphed into a nerdy breed of urban legend, anecdotes are all we have to work with.

I expect we’ll discover a whole new load of phobias and neuroses when humanoid robots are more commonplace. How long it’ll be before that happens is an open question, but I’d suggest that the next decade will see robots invading our homes and workplaces in ever greater numbers. So smile and be friendly… but keep your multitool handy, OK?

A brief scan of the intertubes shows that I’m pretty much the last person to see this, but just in case you haven’t seen it either here’s footage of Petman, a walking robot prototype from Boston Dynamics [via grinding.be, and loads of other places]:

That’s just… hell, I don’t know what it is, I don’t have a word for it. Creepy, awesome, strangely intimidating? All of the above? Anyway, Boston Dynamics (whose name makes me feel like I should be in an episode of Fringe) are the people who brought you BigDog, the strangely pathetic headless canine pack-mule robot which has been bouncing in and out of the geek quarter of the blogosphere since around 2006. According to Technology Review, Petman will be used for research into protective clothing for military personnel, hence its inbuilt ability to sweat in response to environmental changes.

Yeah, I know what you’re thinking; we don’t even have robots smart enough to fetch our breakfast yet, but already they’ve designed one with the ability to sweat. I can’t help but feel there’s something deeply and disappointingly wrong with this development curve.