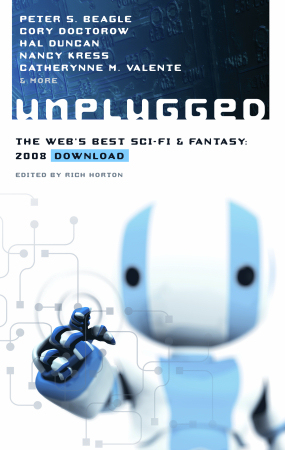 Almost exactly a year ago I had the pleasure of announcing that a story originally published here at Futurismic – Jason Stoddard’s “Willpower”, to be precise – had been selected by Rich Horton for reprinting in his inaugural Unplugged: The Web’s Best Sci-Fi & Fantasy anthology.

And now I have the pleasure of announcing that copies of said anthology are now available from Wyrm Publishing (the people who bring you the excellent Clarkesworld online magazine, and much more); US$14.95 nets you fourteen stories from newcomers and luminaries of the genre fiction scene alike, which strikes me as pretty decent value… not to mention a great way to support the writers who contribute to online publications just like this one.

A recent Publisher’s Weekly review of Unplugged suggested that “[a]fter reading this 14-story compilation, online publishing naysayers may rethink their position.” I suspect we have a way to go before that happens, but anthologies like this are certain to help things along… not to mention reminding us web publishers that we’re doing something worthwhile!

So why not go buy a copy of Unplugged, and show some support for the writers (and publishers) who’ve provided you with great stories that you could read for free?

OK, you’re going to have to excuse me being a bit effusive here, but I’ve just heard that – for the first time – a story originally published on Futurismic is going to appear in a Best of the Year anthology!

Rich Horton has decided to publish the first anthology devoted purely to stories published on the web from multiple publishers. Unplugged: The Best of Online Fiction will be released by Wyrm Publishing (the people behind the excellent Clarkesworld Magazine), and it will feature Jason Stoddard‘s “Willpower“, published just two weeks ago right here on Futurismic!

Here’s the complete table of contents:

Congratulations to all the authors, and to the sites that published them! You can’t imagine how proud I am to see Futurismic considered alongside big hitters of online genre fiction like Strange Horizons and Tor.com – I run this site for the love of short form science fiction, but to see Chris’s editorial skills and Jason’s writing vindicated by Horton’s selection is a greater gift than I ever hoped to receive this year.

Indeed, Unplugged is a great moment for webzines in general – we’re not third-class venues any more. So thank you, Rich – and thank you all – for reading and believing in what we do. Here’s hoping for more selections in years to come!