An interesting and lengthy overview post from Randy Farmer and Bryce Glass, authors of the book Building Web Reputation Systems, on (unsurprisingly) the basics of building web reputation systems [via MetaFilter]. 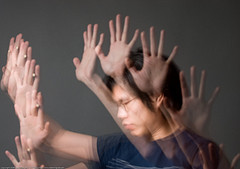 Suddenly, touchscreen devices seem to be everywhere, changing the ways in which we interact with our phones, computers and tablet devices. But the next user interface revolution is already waiting in the wings – gestural interfaces will complete the user-interface paradigm shift that touchscreens have started. So says Stowe Boyd:

Gestural UI, or ‘hand jive’ as I call it, once deployed as a built in aspect of future computers, like touchpads and mouses are today, will set the stage for a rethink about user experience.

First we will see hand jive as a way to manipulate the gears of now-tradition windowed UIs: pulling down a menu in an app, moving windows around, dragging a file to the trash.

In the future, we’ll have real Minority Report stuff, without the enormous touch screens: we’ll also see the emergence of augmented reality goggles — Terminator goggles — where we can toggle back and forth between 100% computer screen sorts of display to 100% augmented reality. And the goggles — as an integrated part of the computing device — will be watching our hands for commands, and watching the world for reality to augment.

The combination of these trends will make computing primarily mobile: we’ll have an iPhone sized device we carry all the time, which will be a phone and a PC. We will be free of LCD screens — in general — courtesy of our goggles, and free of keyboards, courtesy of hand jive. A keyboard can be imaged on any flat surface by the goggles, and we can type without a physical keyboard because the gestural system is watching our fingers in 3D. And of course, a lot of things could be done without typing, especially once kids start using sign language and voice to communicate with computers. (I say kids because that’s who start first.)

With the right software installed, it may one day be possible to cut a call by “whacking” the phone in a particular pattern while it’s still in your pocket.

The team developed a simple vocabulary of “whack gestures” designed to rapidly communicate simple commands such as silencing the phone. To help the device distinguish the gestures from background bumps, each begins and ends with a firm “whack”.

The biggest roadblock for gestural UI will probably be the software houses, however. Keith Stuart of the Guardian Games Blog wonders whether anyone will actually bother using Microsoft’s Project Natal motion sensor device for truly new gaming experiences, or whether they’ll all play it safe with re-runs of what has gone before:

For a start, publishers are massively, obsessively risk averse. If there’s any way of leveraging market pre-awareness into a new product they’ll leap at it. So even if these companies are developing titles that work only on Natal – not just new games with vaguely specified Natal-support – it’s unlikely that they’ll do this without recourse to familiar brands and gameplay experiences. In other words, we may get a dedicated Natal version of, say, Mass Effect 3, but it’ll still be Mass Effect, it’s just that you’ll act out those in-depth personal relationships with aliens rather than just talking and watching the cut-scenes.

A little pessimistic, perhaps, but given the enduring tightness of the global economy, playing it safe is likely to be the order of the day for those with the most to lose. But we shouldn’t discount the independent hardware hackers, who the Electronic Frontier Foundation suggests will be a growing cultural force in the year to come. Every day my RSS feeds are full of ordinary geeks doing amazing things with off-the-shelf devices and a handful of cheap parts, and despite the best efforts of easily-riled device manufacturers and their copyright lawyers, it’s getting harder and harder to keep the details of mods, hacks and retrofits a secret.

Cory Doctorow’s latest novel Makers (which I still haven’t had the time to sit down and read beyond the tenth instalment or so) posits a near-future economy where the agile and frugal make-do mind-set of hackers and makers changes the way the world does business for ever. With 3D printing showing every sign of maturing to the affordable “prosumer” level in the next year or so, and landfills across the planet still inhaling mountains of obsolete consumer electronics and tcotchkes, it’s far from being the most implausible future I’ve read about lately. [image by See-ming Lee]

What do you think – will our recent economic woes push us toward reuse and repurposing, or will we wander slowly but surely back to corporate-capitalist business-as-usual?