Seeing as how SpaceX managed to pull off the first commercial rocket launch to reach orbit over the weekend, I figure we’re allowed to get a bit excited about space again… it’s a welcome distraction from the World Cup, if nothing else. It might have been even more of a distraction to our antipodean friends, some of whom spotted weird lights in the sky that may (or may not) have been parts of the Falcon 9 falling back to Earth [via SlashDot].

But who can we trust to tell us the truth of it, hmmm? After all, the Chinese have a history of telling porkies about their space program, and hell knows the Cold War space race was all about giving the people the story you wanted them to believe… it might be fun to work as a spin doctor for a multinational space company.

Speaking of the Cold War, did you know that Venera, the Russian mission to Venus, was the first to send back photographic images from another planet? If any nation-state or corporation is taking a poll on where we should send space probes next, my vote goes for Titan – it’d be fun to find out if those atmospheric anomalies are actually the signal of methane-based microbial life that they appear to be…

Combining two of the most compelling tropes from science fiction: floating cities and colonising other planets, Geoffrey Landis, a scientist at the NASA Glenn Research Center (who also writes science fiction, apparently) suggest the idea that humans could live in aerostatic cities in the upper atmosphere of Venus:

50 km above the surface, Venus has air pressure of approximately 1 bar and temperatures in the 0 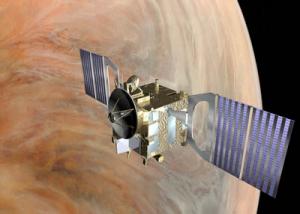