Puzzled by posthumanism? Looking for an entry-level introduction to this thing that people call the Singularity? Well, sometimes it’s best to go straight to the source – sf novelist and computer scientist Vernor Vinge coined the concept of the Technological Singularity in 1993, so who better to explain the basics, as in this brisk interview at H+ Magazine:

Some folks will say there have been singularities before — for instance, the printing press. but before Gutenberg, you could have explained to somebody what a printing press would be and you could have explained the consequences. Even though those consequences might not have been believed, the listener would have understood what you were saying. But you could not explain a printing press to a goldfish or a flat worm. And having the post-Singularity explained to us now is qualitatively different from explaining past breakthroughs in the same way. So all these extreme events like the invention of fire, the invention of the printing press, and the evolution of cities and agriculture are not the right analogy. The technological Singularity is more akin to the rise of humankind within the animal kingdom, or perhaps to the rise of multi-cellular life.

It’s tricky trying to explain something which, by definition, is inexplicable – which is probably why the Technological Singularity is as hard to pitch at the average layman as at an industry expert. I’m still not sure I “believe” in it as anything more than a convenient metaphor for a world that changes fast enough to alienate people within their natural lifespans, but on that level alone it’s hard for me to think about the passing of the next thirty years – which would see my lifespan little less than doubled – without realising I’m going to feel like a stranger in a strange land on an hourly basis. Hell, it already happens at least once a day.

So, what do you lot make of the Singularity – inevitable geek rapture? Metaphor for an accelerating culture? Or just the sound of comp-sci lips flapping in the breeze at sf conventions? 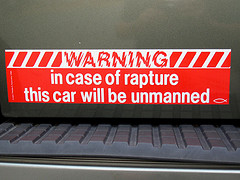 The New York Times has a brief, appreciative item about Vernor Vinge and his novel Rainbows End. Here’s a nice if-this-goes-on snip:

“These people in ‘Rainbows End’ have the attention span of a butterfly,” [Vinge] said. “They’ll alight on a topic, use it in a particular way and then they’re on to something else. Right now people worry that we don’t have lifetime employment anymore. How extreme could that get? I could imagine a world where everything is piecework and the piece duration is less than a minute.” 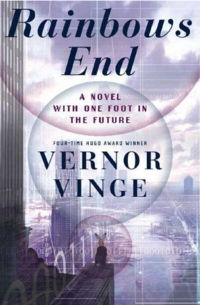 Tor author (and sometimes Futurismic blogger) Tobias Buckell has an interesting post talking about the effects of authors giving away their novels. There has been a lot of criticism of the practice by some writers and lots of praise from other corners. But with Neil Gaiman adding his superb bestseller ‘American Gods’ to the list of books you can legally download for free, are people shooting themselves in the foot or will this bring more income in the future through increased readership?

At the moment, it looks like the practice works. Two of John Scalzi’s books are up 20% and 33% in sales since the first one was released as a free ebook by Tor. As Charles Stross has mentioned, the fact that current ebooks are as much as a few hundred grams of chopped down tree, chemical treatment, ink printing, shiny cover embossing, a few thousand miles of transportation, part of the salaries of manufacturers, printers, truck drivers and shop assistants that make up the price of a typical physical book is simply insane. And that’s not even including the price of an ebook reader like the Kindle monstrosity. So until someone comes up with a £50 reader that gives you digital books for £3, £2 of which goes to the author, ebooks aren’t a business model. But they do provide clever authors with the chance to increase their reader base. What do you guys think? Would you purchase a book after you’ve been impressed by the free ebook version?

[image is the cover of Vernor Vinge’s novel ‘Rainbow’s End’, which you can find for free online here.]

Poor Bill Gibson – the publicity wagon for his current novel Spook Country is still rolling, and he’s probably sick to death of public appearances and interviews, itching to get back to researching his next book. Still, lucky for us – here’s another interview with Gibson by Rick ‘Agony Column’ Kleffel, in audio form for your mobile media player pleasure.

Meanwhile, Vernor Vinge has been chatting to French science fiction site ActuSF (don’t worry, text in English) about his recent (and highly recommended) novel Rainbows End. [Both links via BoingBoing]