Here’s an interesting bit of research from sunny Barcelona: men wearing a virtual reality headset that allowed them to perceive themselves as a female avatar started to identify strongly with their temporarily-assumed gender.

… men donned a virtual reality (VR) headset that allowed them to see and hear the world as a female character. When they looked down they could even see their new body and clothes.

The “body-swapping” effect was so convincing that the men’s sense of self was transferred into the virtual woman, causing them to react reflexively to events in the virtual world in which they were immersed.

Men who took part in the experiment reported feeling as though they occupied the woman’s body and even gasped and flinched when she was slapped by another character in the virtual world.

Later in the study, the second character lashed out and slapped the face of the character the men were playing. “Their reaction was immediate,” said Slater. “They would take in a quick breath and maybe move their head to one side. Some moved their whole bodies. The more people reported being in the girl’s body, the stronger physical reaction they had.”

Sensors on the men’s bodies showed their heart rates fell sharply for a few seconds and then ramped up – a classic response to a perceived attack.

As expected, the body swapping effect was felt more keenly by men who saw their virtual world through the female character’s eyes than those whose viewpoint was slightly to one side of her. In all cases, the feeling was temporary and lasted only as long as the study.

Plenty of opportunity for further research there; I’m no expert, but that looks to me like a validation of the theory that gender roles are socially constructed… but then that theory has been borne out by my personal experiences in virtual worlds, in my own behaviour as well as that of others.

I’ve heard it suggested before that a way to break down some of the more persistent gender prejudices in modern culture would be for everyone to spend a month living the life of the gender they consider themselves “opposite” to – maybe VR and synthetic worlds offer us the closest approximation of that classic science fictional plot device (Stross’s Glasshouse, anyone?).

Via Chairman Bruce, here’s an interior design concept for those of you who find carpets or exposed boards a little pedestrian (arf!) – augmented reality floor tiles. SRSLY.

Researchers at McGill University in Montreal, Canada have developed floor tiles that can simulate the look, sound and feel of snow, grass or pebbles underfoot. Such a tool could perhaps be used for augmented reality applications, tele-presence, training, rehabilitation or even as virtual foot controllers.

The modular “haptic” floor tiling system is made up of a deformable plate suspended on a platform. Between the plate and platform are sensors that detect forces from the user’s foot. And the plate can give off vibrations that mimic the feeling of stepping on different materials. A top-down projection and speakers add visual and audio feedback.

A long-distant precursor of an essential component for the the StarTrek holodeck, perhaps? 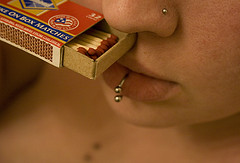 COSMOS Magazine has a round-up of the current state-of-play in the nascent field of digital scent reproduction. We can do some pretty impressive stuff with digital media for our eyes and ears, and research into haptic technology seems to be ramping up in order to conquer the heretofore neglected sense of touch, but smell is a tricky proposition, because it’s a chemical process. But one Jenny Tillotson of London’s University of Arts seems to be making some advances:

Her newest gadget is the button-sized ‘eScent’. It contains bio-sensors that monitor changes in the blood pressure, respiration and skin’s electric potential. When it detects a change, it sends signals to the lab-on-a-chip devices, which then change the type or intensity of fragrance released.

Though currently crude at detecting more subtle mood changes, the idea is that eScent will eventually be able to detect stress or anxiety and then release appropriate scents to soothe the wearer. “I’m more interested in health aspects linked to aromachology, the science of fragrance, rather than just a gimmicky scent delivery system that substitutes the perfume bottle,” Tillotson says.

There is evidence to show that there is a direct link between the sense of smell and human health and well-being. “Three quarters of the emotions that we generate on a daily basis are affected by smell,” she says. “Certain odours can also relieve side effects from chemotherapy, or significantly benefit people who suffer from insomnia, muscle stiffness, bronchitis, poor concentration, indigestion, and high-blood pressure.”

Therapeutic uses are all well and good, but Tillotson’s earlier “Smart Second Skin” system strikes me as the more likely deployment to be taken up by well-moneyed early adopters, combining as it does high fashion with high technology:

Smart Second Skin combines lab-on-chip technology with miniature bio-sensors. Lab-on-chip allows the storage and handling of tiny amounts of fluids on small chips. These chips can be programmed to release specific scents at specific times.

“Just as people store different genres of music on their iPods, this method offers a new sensory system to collect and store a selection of fragrances close to the body: a modern iPod of the fragrance industry embedded in fashion” Tillotson says.

Looking further down the line, aromachology may well become another facet of immersive virtual and/or augmented reality systems, and perhaps to some user interfaces in applicable industries; it’s well known that the sense of smell is deeply linked to human memory, and so it might add an extra dimension to simulated environments… as well as offering new avenues for psychological therapies.

But it’s a double-edged sword: supermarkets and large corporate offices are already well aware that certain smells – freshly baked bread or apples, for example – can influence behaviour. What sort of tricks might they learn to pull when any smell can be synthesised at short order in direct response to physiological triggers? [image by me and the sysop]

National Public Radio just aired a wonderful conversation between Spore and Sims creator Will Wright and Harvard biologist E.O. Wilson, well worth a read or listen. But the chat didn’t go the way Wright thought it would:

I came into the interview with all these questions I wanted to ask him about evolution,” Wright said, “but his first response was, ‘Oh, I thought we were going to talk about games!'”

Wright wasn’t completely surprised. One of Wilson’s goals has been to “unify science with disciplines such as the humanities,” Wright said. “He is one of the few scientists who really has the guts to do that.”

So, asked by Wright about the role of games in education, Wilson said:

“I’ll go to an even more radical position,” Wilson said. “I think games are the future in education. We’re going through a rapid transition now. We’re about to leave print and textbooks behind.”

Wilson imagines students taking visits through the virtual world to different ecosystems. “That could be a rain forest,” he said, “a tundra — or a Jurassic forest.”

Wilson said that for the most part, we are teaching children the wrong way. According to the biologist, “When children went out in Paleolithic times, they went with adults and they learned everything they needed to learn by participating in the process.”

That’s the way the human mind is programmed to learn, Wilson said.

But he believes that today, virtual reality can be a steppingstone to the real world. It can motivate a child to exploration.

Wilson had a very different experience growing up. He explored the real world — and its creatures and plants — from a very young age. He credits his permissive parents and the schools he attended for allowing him to “disappear” into the forest.

“No one knew what I was doing,” he said.

Wilson is now studying the origins of altruistic behavior, taking his cue from Paul Gauguin: “Where did we come from? Who are we? Where are we going?” An education system that produces that kind of curiosity is the one I want for kids today.

Such ideas aren’t new to most of us, but it’s encouraging to hear them nudge their way towards conventional wisdom.

As if an invasion of psychiatrists desperate for work wasn’t hint enough, the metaverse is still big business. Despite the media furore over Second Life and other synthetic worlds having died off considerably, the virtualities themselves have not, as Victor Keegan at The Guardian reports:

Actually, they are booming. The consultancy kzero.co.uk reports that membership of virtual worlds grew by 39% in the second quarter of 2009 to an estimated 579 million. Not all these members are active but I can’t think of anything, anywhere, that has grown so fast in the recession this side of Goldman Sachs bonuses.

There’s another curious thing: Facebook and Twitter are lauded to the skies, but neither has found a way to make money – whereas virtual worlds such as World of Warcraft, Entropia Universe, Habbo Hotel, Club Penguin and Second Life are all profitable because their business models are based on the digital elixir of subscriptions and micropayments, a formula that other websites, including newspapers, would die for. Twitter makes the noise, Second Life makes the money.

If you think virtual worlds are a passing fad, look at the figures. Almost all of the 39% growth came from children.

It seems that many of the newer metaverse startups have learned from Second Life’s very public teething troubles, too:

In order to get a more streamlined experience, most of the new virtual worlds don’t allow users to make their own content. Twinity, which has just raised €4.5m in new funding, has a virtual version of Berlin and Singapore (with London still in the pipeline): you buy existing apartments or rent shops but can’t build yourself. Bluemarsonline.com – still in testing mode – promises much better graphics and more realistic avatars at the expense of not allowing members (as opposed to developers) to create their own content.

With technology moving so fast and a whole generation growing up for whom having an avatar is second nature, virtual worlds have nowhere to go but up. Only they won’t be virtual worlds – just a part of normal life.

Maybe more normal than normal life. After all, if we continue down the paranoid path of protecting children from reality’s every rough edge, the poor sods will still need somewhere to go and hang out.