It’s very pretty, but – as pointed out at FD – not particularly useful; the physical book ends up as a very cumbersome interface for data that would be more easily and flexibly displayed as a fully computer-native medium from the get-go. But there’s a hint of promise in there, too; an idea waiting for its “killer app”, perhaps. Which is state-of-the-art AR in a nutshell.

Just a quick one: even if you’re not particularly interested in demographic research into how different segments of the population of the United States spend their time each day, the interactive graphical data thingy that the New York Times have produced to illustrate it is pretty sweet, and good for killing ten minutes of idle time… not to mention allowing you to reflect that the idle time in question is theoretically represented in the data you’re observing; how delightfully post-modern! [via MetaFilter]

What other data sets would benefit from this sort of presentation?

Some glorious and fascinating reportage-porn at memetracker that shows how news stories are taken up and how long they last and what their impact is:

They found a consistent rhythm as stories rose into prominence and then fell off over just a few days, with a “heartbeat” pattern of handoffs between blogs and mainstream media. In mainstream media, they found, a story rises to prominence slowly then dies quickly; in the blogosphere, stories rise in popularity very quickly but then stay around longer, as discussion goes back and forth. Eventually though, almost every story is pushed aside by something newer.

There is something truly wonderful about seeing this information laid out in such an intuitive manner. This kind of analysis of the growth, spread, and retention of ideas is certainly an area that will expand and grow over time. 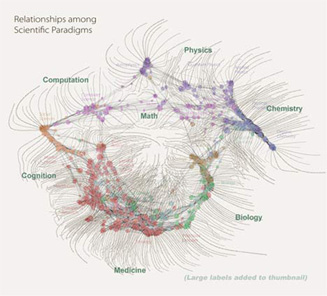