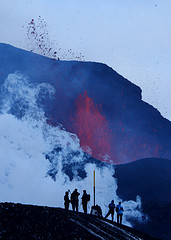 Jeff Jarvis suspects that the ongoing and aviation-distressing plume of volcanic ash currently drifting over Europe may accelerate the demise of good old-fashioned physical mail networks:

Right now, it is impossible to get a document to or around Europe with speed. People can’t fly. Mail can’t fly. Even when the air clears, there’ll be diminished faith in the ability of the post office — not to mention FedEx, DHL, and UPS — to make speedy delivery of documents. Any company or agency with an ounce of strategic sense is creating a plan now to convert to digital. It is speedier (instant!) and more certain (guaranteed) and cheaper (free) and even earns green points (no dead trees, no fuel, no fumes). What’s not to love?

So what does this do to the post office? In Europe, it’s going to be deadly expensive. The first-class mail that supports postal services around the world will be bound to shrink. Prices will then have to rise, forcing demand to shrink more.

Meanwhile, without air freight — or with the risk of it disappearing for days, weeks, months, even more — more goods will have to be moved by train and truck, raising demand there and thus raising prices of ground transport for the mail.

When first-class mail declines, the horrendous losses at our U.S. postal service will accelerate, forcing decisions that the government — as is its habit — would like to put off for a few years. There will be less first-class profit to subsidize the delivery of media (another nail in the coffin of magazines) and advertising (another reason to jump to digital) and parcels (opening up more opportunities for private competitors).

The delivery industry could be disrupted as profoundly but much more quickly than media. I’d sell stock in FedEx. If I thought the postal service would collapse, I’d buy it in UPS. I’m not sure about Amazon. You might think that Cisco would be a big winner but I’ll bet on Skype and hope it goes public soon. Of course, short every airline. That sound you hear is dominos falling.

Hmmm. Time to start up that peer-to-peer distributed delivery network?

It’s not just a big disruptive factor for the mail industry, either: all of a sudden, Brits are being reminded uncomfortably of just how dependent on air travel they’ve become. Their response? Start comparing the “rescue” plans (mobilise the Royal Navy!) to Dunkirk, of course. How better to cope with staring down the barrel of continuing economic decline than harking back to World War Two’s fading sepia-tinted glories, right?

More seriously, this is a great time for people everywhere to start thinking hard and pressuring their governments (or themselves) to invest in sustainable mass transit infrastructure that can’t be knocked out of kilter by clouds of dust… or shortages of fuel, for that matter (different cause, very similar effect). If you wanted a sketch or case study of what encroaching Peak Oil might look like from an economic, social and political perspective, watching the UK headlines right now is the closest you’re going to get without burning your fingers. Don’t just sell your UPS shares – sell all the ones you have in airlines, too. Reinvesting in transcontinental high-speed rail might be an option, and dirigibles are very Zeitgeisty (if only in fictional worlds)… but the future don’t got a lot of (civilian) contrails in it no more, mister.

I’ve got five bucks and a slightly-broken swivel chair that says John Robb is grinning a huge I-told-you-so grin right now. Does anyone want to open a book on the odds of the UK government bailing out the aviation sector? Because they’ve got their caps in their hands already… 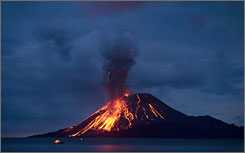