Okay, here’s something of a guest-post. I got a message a few days ago from someone who I’m reasonably convinced is actually Joshua Harris – subject of the movie We Live In Public, which I mentioned a while ago. Why am I convinced that this out-of-the-blue contact is from the actual Josh Harris and not some imposter pulling my leg? Well, I don’t think an imposter could pull off the degree of chutzpah on display here; you see, Joshua Harris wants me – and all of the rest of you, too – to nominate him for the post of Director at MIT’s Media Lab.

No, seriously. Here’s his message to you, verbatim:

my name is josh harris and i build human chicken factories of the future (or what i call The Wired City).  the idea is to build the future out as far in advance as possible NOW so that we will gain perspective on the world that we are walking into 15 years from now.

i figure any loyalish futurismic reader can extrapolate where The Wired City is headed so i’ll leave that to your imagination and comments.  if elected as the new Director of the MIT Media Lab i promise to hear any and all futurismic reader ideas and suggestions.

read/view the links below, if it what i am saying makes sense to you then by all means please nominate me for Director of the MIT Media Lab.  and pass the word along.

Here’s some contextual content for you to browse through, as supplied by Harris himself:

(For my money, the TechCrunch link at the top is the one that’ll get you up to speed quickest.)

And here’s the blurb from a one-sheet run-down on the Wired City project:

The Wired City (TWC) orchestrates millions of hours of audience “self surveillance” into a hierarchical system that generates compelling broadcast and netcast quality programming.

Key production elements of The Wired City include:

Key commerce elements of The Wired City include:

And here’s the MIT action that Harris wants to combine with his Wired City idea: a computer system that can precisely identify mouse behaviour patterns from camera footage. In real-time.

If you have no idea who Joshua Harris is, then I’d suggest you should find out; his is a pretty fascinating story, whichever way you look at it. Those of you who do know who he is are either thinking “hell yeah, give the guy the job!” or “giving him that job would be madness of the highest order”… or possibly both at once, which is the camp in which I find myself. There’s no doubt at all that Harris is a loose cannon of prodigious proportions, but it’s also impossible to deny that he saw the rise of the soc-net participatory panopticon and the ultimate ethical outer limits of “reality” television programming long before either actually existed, and he made that vision an undiluted (and pretty terrifying) reality.

He’s a smart guy, possibly dangerously so, but it’s dangerous intelligence that has the best chance of thinking outside the cliches and seeing the futures that we don’t want to imagine; partner Harris with the MIT boffins to regulate the more extreme ethical weirdness, and The Wired City could be a crucial experimental window into our ubicomp-everyware-lifelogged near-future, a Stanford Prison Experiment for the twenty-teens… not to mention a form of reality television more deserving of the name.

I have no idea whether MIT would even honour a mass nomination of Harris to the directorship of the Media Lab or not… but I went and nominated the guy anyway, because I’m a sucker for visionary outliers, and because discovering the surprisingly unknown story of the Quiet project totally blew my mind. If you’re a sucker for mad genius too, or if you think we should be experimenting more boldly with the effects of complete mediation of the human experience, maybe you should nominate him too.

To nominate Joshua Harris for Director of MIT’s Media Lab, go to this webpage, enter your own information as nominator, and the following for Harris as nominee: 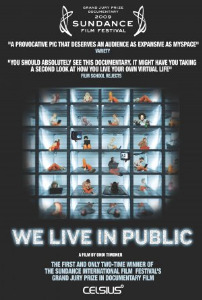 A couple of nights ago, I sat down and watched We Live In Public, Ondi Timoner’s award-winning documentary about Josh Harris, Pseudo.com, the Quiet experiment, and the eponymous project that involved Harris streaming every mundane moment of his life onto the web for anyone to watch. I was particularly amazed that Quiet – a darkly and deliberately Orwellian behavioural experiment involving real people that not only prefigures but utterly eclipses much of the more recent reality television – isn’t better known and more widely discussed (though I believe it was a big influence on Douglas Rushkoff, who appears as an interviewee in the film and who was certainly part of the New York dot-com boom scene that floated Harris to prominence, and which I presume influenced and informed Rushkoff’s flawed but fascinating novel The Ecstasy Club).

The same applies to Harris, who comes across as a fascinating and damaged genius and visionary who foresaw – and concretised – many of the privacy and publicy issues that are hot button topics on today’s intertubes. I’m not sure I believe that Harris’ vision of a totally mediated world is inevitable, or even possible, but the extremity of the example he created is a valuable lesson and cautionary tale… as is his life as a whole.

The caveat here is that Timoner’s previous big success (and Sundance Festival winner) is the controversial rockumentary Dig!, which has been accused by Anton Newcombe of The Brian Jonestown Massacre of portraying him and his band in a selectively negative light as compared to the film’s other main subjects, The Dandy Warhols. Much as I’m a fan of Newcombe and his work, however, it’s pretty clear that he’s a damaged genius (like Harris, though in a very different manner), and whether or not Timoner’s editing really was deliberately skewed to cast Newcombe as the bad penny will remain a mystery to anyone who wasn’t involved in the project. Sensation sells, after all… and the footage of Quiet in We Live In Public makes much of its more shocking aspects; I guess what I’m saying is that the same pinch of salt you’d apply to any other modern media is surely worth using here.

But that pinch of salt does nothing to negate a powerful story, and one that I think any internet habitue should watch. Residents of the United Kingdom have another 22 days (as of publication of this post) to watch it for free on Channel 4’s 4od service, and I urge you to take advantage of it while you can. Everyone else – keep your eyes peeled for an opportunity of your own. This is a hugely important document in the history of mediated network culture.