There’s nothing worse than being halfway through a long walk around the city only to have your MP3 player run out of juice[1]. Wouldn’t it be great if you could keep it charged up just by walking?

Japanese electronics company NTT Docomo evidently thinks so, as they’ve been showing off a prototype shoe that can generate 1.2 Watts of power through the motion of their wearer. 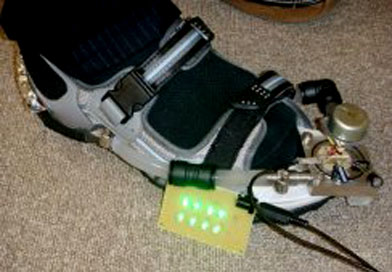 Spiraltwist at grinding.be neatly sums up my feelings: “Concept is excellent, design needs to be refined.” That said, Docomo reckons the finished version will be on the market by 2010, by which time there’ll be plenty more pocket-sized gimcracks to plug it into… provided they have compatible plugs and sockets, natch. [image from linked DVICE article]

While we’re on the subject of wearable tech, Gizmodo has a round-up of geeksome gadgetry that means you can have your cyberpunk future rightfreakingnow… provided you don’t mind looking like a fool. I mean, trousers with a keyboard and speakers built in? Come on… [via Hack-a-Day]

[ 1 – OK, there are plainly plenty of things worse than this, but I thought I’d go for upbeat today; it’s a Tuesday, after all. ] 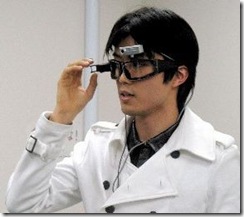 More Japanese cyber-technology! These Cyber Goggles have been developed at the University of Tokyo; they record video footage of everyday objects, run them through an object recognition routine and file them away in a database. End result – a searchable visual log of where you last saw something, suggested as an ideal aid to the elderly whose memories aren’t so sharp as they once were. [image from Pink Tentacle article]

Sure, they look a little clunky right now, but that’s just a prototype – size and bulk won’t be a problem by the time they get these things to production.

The real problem, as pointed out in the comments, is how to make sure the forgetful user doesn’t forget where they left their Cyber Goggles …