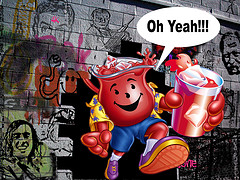 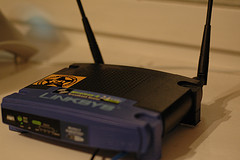 Remember me mentioning the special paint for making wi-fi cold-spots?

Well, here’s a reason you might want to invest in some – via Bruce Schneier we discover that some folk at the University of Utah have found a way to surveil the inside of a building using wireless signals:

The surveillance technique is called variance-based radio tomographic imaging and works by visualizing variations in radio waves as they travel to nodes in a wireless network. A person moving inside a building will cause the waves to vary in that location, the researchers found, allowing an observer to map their position.

The researchers, electrical engineering graduate student Joey Wilson and his faculty advisor Neil Patwari, have tested the technique with a 34-node wireless network using the IEEE 802.15.4 wireless protocol, according to the MIT Technology Review. By “interrogating” the space with signals and multiple receivers, the researchers found they were able to read the waves to detect the location of a moving object within a meter of accuracy.

OK, so it’s not quite kit you can buy from the local Electronics Barn… but you can pretty much guarantee that now the proof-of-concept has been done, all sorts of smart types will be looking at making affordable homebrew versions. [image by delta_avi_delta]

I’ve been saying for a few years now that once we reach a saturation point with wireless internet access, cafes and other establishments will start advertising the absence of wi-fi in the same way the currently advertise its availability. Even an always-online geek like myself sometimes feels the urge to retreat from the cloud, after all, even if only so I can sit down in peace with a book for an hour or two.

But there are plenty of other reasons why you might want to spend time somewhere that wi-fi can’t reach you… or alternatively somewhere where there’s wi-fi available which can only be accessed by someone inside the building or room in question. The classical way to make a room impermeable to high-frequency signals is a Faraday cage, but that’s neither cheap or architecturally simple. Now there’s a much simpler option which may aid the proliferation of wi-fi cold-spots in urban areas – a special paint based on an aluminium-iron oxide that resonates in the same frequency range used by wi-fi routers.

And not just cold-spots. I can definitely see a market for wi-fi hot-boxes – rooms with carefully controlled physical access (think burly doormen and surly cashiers) wherein you and a bunch of, er, associates can set up an ad-hoc LAN connected to the web through a heavily encrypted router. No one outside that room – even the establishment’s proprietors – could know what data had been passed around within it.

If you’ll excuse me, I’m off to book a one-way ticket to Mexico City and draw up a business proposal…