Not-entirely-unsurprising news from the world of evolutionary psychiatry: human use of psychoactive compounds found in plants and animals is thousands of years old, and evolutionary selection may actually have favoured those of our ancestors who were wired to get a kick from certain substances:

According to Randolph Nesse, evolutionary psychiatrist at the University of Michigan, at some time in humanity’s distant past, individuals whose brains had a heightened response to emotion-linked neurotransmitters (such as dopamine and serotonin) were better suited to survival.

This meant that as the generations passed, heightened response became the norm. […]

Archaeologists have found evidence of kola nut (caffeine), tobacco (nicotine), khat (an amphetamine-like plant), betel nut, and coca, at various sites dating back at least 13,000 years, indicating that humans have, in fact, been drug users for a very long time. Across the globe, people in non-Western cultures are very familiar with these and other mind-altering substances.

“It’s widely believed that human drug use is a new and pathological phenomenon,” says Roger Sullivan, an anthropologist at California State University at Sacramento. “But psychoactive plant toxins were a mundane occurrence in the environments of hominid evolution, and our ancestors may have been exploiting plant drugs for very long periods of time.”

Sullivan and Edward Hagen of Humbolt University in Berlin believe that compulsively seeking these items in the past might have been adaptive during times when nutrients were hard to find.

Human beings: getting baked to deal with hard times since 11,000 BC. Goes some way to explaining why drug legislation – a very very recent phenomenon indeed – has done so little to stop folk wanting to get loaded… and promises a whole new generation of slogans from psychoactive evangelists.

Speaking of legislation, control and addictive substances, here’s a research project of staggering pointlessness: how many videos of people smoking cigarettes in a fetishistic context are easily viewable by teenagers on YouTube?

(With that sort of background, one assumes she’s eminently qualified to know how well associative imagery can push psychological buttons… )

Paek conducted the study of “smoking fetish” videos—videos that combine smoking and sexuality. “The fact that we can see the videos and analyze their content means that teenagers can see them too.

The majority of smoking fetish videos studied explicitly portrayed smoking behaviors, such as lighting up, inhaling, exhaling, and holding the tobacco product. More than half were rated PG-13 or R.

More than 21 percent of the videos contained at least one of the five fetish elements defined in the paper, including gloves, high heels, boots, stockings, and leather or latex clothes.

More than a fifth? O NOES! Well then, we’d better censor all that stuff pretty sharpish, hadn’t we – after all, wrapping up a behaviour one wants to discourage in veiled mystique, puritanical panics and age restrictions has always worked so well before… if we airbrush out everything we don’t like in the world, eventually everyone will be just as self-satisfied as we are!

[ Pre-emptive: I’m not suggesting that teenagers or anyone else smoking cigarettes is a “good” thing. What I’m suggesting is that worrying about videos of people smoking on YouTube as a strong cause of such is laughably foolish. ] 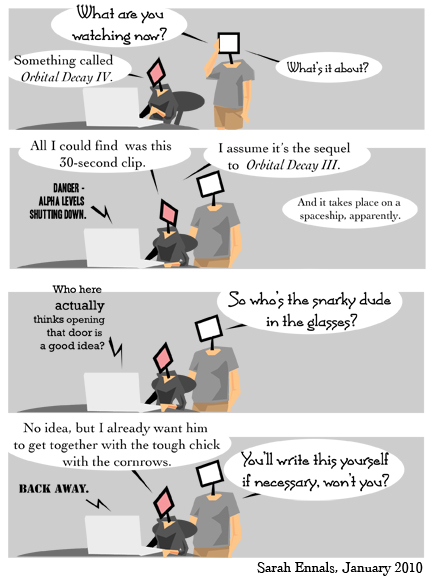 It’s impressive how far new media has come and how important it is becoming in all parts of modern life. In addition to the myriad of blogs, news sites and internet radio stations contributing to the discussion of pretty much anything from politics to skateboarding, we have the emergence of the online video.

Video is beginning to catch politicians out when they ‘misspeak’ on a previous statement or action. Senator George Allen’s defeat in 2006 was widely credited to a young staffer catching him using a racial slur on video. But it’s not just accidental footage that’s making an impact. Barack Obama’s ‘A More Perfect Union’ speech has over 4 Million views in less than a month. Now Youtube can claim another powerful figure, with Jordan’s Queen Rania using the medium to ask people for their stereotypes and questions about the Middle East in an attempt to bridge the gap between Arab States and the West. This kind of meta conversation between those who even ten years ago would just not have happened. Interlinked worlds like those in David Louis Edelman’s ‘Infoquake’ are easier to imagine with online interactions like this one.