We’ve looked at possible explanations for the seemingly inexorable rise of the zombie as a pop culture signifier before: are they the American Godzilla, standing in for technology run amok which can only be defeated by frontiersman-like skills with machete and shotgun, or are they – as suggested by Futurismic‘s very own Jonathan McCalmont – a shambling metaphor for a transhuman future?

Well, here’s another take for you: via Crooked Timber, Scott McLemee reviews Theories of International Politics and Zombies by Daniel W. Drezner, which seems to suggest the fear of the zombie apocalypse is, quite simply, the fear of the geopolitical status quo:

[…] if I read him correctly, the author does seem to think that the realist paradigm in international relations theory has a special relationship with the zombie-apocalypse scenario. It rests on the intertwined principles that “anarchy is the overarching constraint of world politics” (that is, there is no “centralized, legitimate authority” able to enforce a particular order among nation-states) and that “the actors that count are those with the greatest ability to use force,” namely “states with sizable armed forces.” While nation-states possessing an advanced military-industrial complex would have a definite advantage in human-zombie combat, the balance of terror is not one-sided. The tendency of zombies to swarm is a staple of movies and fiction; it turns them into something like an army. The logic of the realist paradigm is to treat states as driven by “an innate lust for power.” Likewise, the undead “have an innate lust for human flesh.” Power and flesh alike count as scarce resources. One has an interest in preserving them both.

The realist assumes that powerful nations have — and may expect to continue to enjoy — the advantage over weaker ones in defining the world order. But the tendency of might to create its own right also benefits the zombies. They are single-minded (if that’s how to put it, since they are dead) and can create more zombies just by biting. This gives them enormous power, and that power is highly renewable. Not all realists are zombies, of course; but all zombies, by default, practice realpolitik.

“Powerful states would be more likely to withstand an army of flesh-eating ghouls,” Drezner writes. “Weaker and developing countries would be more vulnerable to zombie infestation. Whether due to realist disinterest, waning public support, bureaucratic wrangling, or the fallibility of individual decision-makers, international interventions would likely be ephemeral or imperfect. Complete eradication of the zombie menace would be extremely unlikely. The plague of the undead would join the roster of threats that disproportionately affect the poorest and weakest countries.”

A sobering conclusion. In other words, a zombie apocalypse would be terrible — but it would not really change things very much.

That book’s going straight on my wishlist… 🙂

Looks like someone at Wired decided to test Stephen King’s aphorism about undead-themed movies being tied to the movements of the fiscal economy (i.e. zombies populate a boom, vampires haunt a bust). Bad news for fans of simple explanations: either the theory is bunk, or the zombie movie genre bubble is about to do a dot-com and burst spectacularly.

Well, a guy can dream, right? 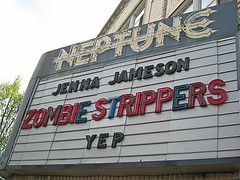 Via SlashDot, here’s a brief piece at Forbes that wonders whether the zombie is Americas equivalent of Godzilla – a symbol of technology run amok, but one that can be dealt with in hand-to-hand mano a mano combat rather than by the deployment of the state’s military resources:

[…] there’s one major difference between Godzilla and the attack of the zombies: Godzilla fought scientists and the military (and maybe the occasional band of adorable children), but zombie battles usually are a person-to-ex-person struggle. While Godzilla swatted at planes and crushed tanks underfoot, zombies are done in by weapons such as shotguns, hand grenades and the ever-handy chainsaw.

Americans must like the idea that, as out of control as our hubristic science might become, a good machete and a 12 gauge in the hands of a competent man or woman can always save the day.

To be sure, it’s easy to read more into the popularity of zombies than might actually be there. Film-goers have always loved a good scare, and a shambling collection of neuron-challenged corpses make a pretty terrifying story. And if my zombie-obsessed 14-year-old son is a representative sample, blowing the undead away with heavy weaponry has a solid adolescent demographic appeal. But there’s no question, at least in my mind, that zombies (and Godzilla) are an allegorical representation of our fear that science and the technologies it spawn will lead to our destruction.

It’s a plausible reading, I think, though I’d hesitate to claim it as anywhere near definitive. It does chime rather well with our very own Jonathan McCalmont’s theory that the modern iterations of the zombie trope reflect a fear of transhumanism. I also seem to remember reading a recent critique that pegged the zombie as representing our subliminal fears of population expansion due to increased lifespans for the “unproductive elderly” (and/or immigration), but I’m damned if I can find the link or remember the source – anyone else catch that one, at all? [image by ella_marie]

One thing I can say for certain about zombies, though, is that I’m sick to the gills of hearing about them. As far as shark-jumping in the genre blogosphere goes, the only meme that comes close to the tedious prevailing ubiquity of zombies is steampunk… which is also starting to wear the welcome mat very thin indeed, at least in this household.