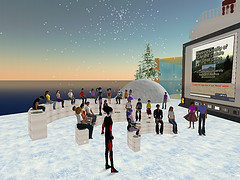 The corporate love affair with Second Life seems to be fading, at least in some camps, as businesses realise that having a sim isn’t going to instantly develop them a massive revenue stream. Chris Anderson, editor of Wired and the guy behind the Long Tail hypothesis, wrote a short piece explaining why he thinks metaverse marketing is a pointless proposition, which developed into an interesting conversation with SL uber-pundit Wagner James Au. The jury is still out, I guess … but as Jason Stoddard says, it’s early days yet, and it’s a wise move to get on the train while there are still plenty of seats.

However, according to a report in The Australian [via], terrorist organisations are taking to the metaverse like ducks to water, and allegedly using virtual worlds as training platforms to dry-run attack plans. There may well be a grain of truth in there, but the story reeks of sensationalist over-hype to me … however, it’s given Charlie Stross the opportunity to pat himself on the back for predicting that we’d see just such a story. To be entirely fair, though, Edward Castronova discussed the same ideas in his excellent book Synthetic Worlds: The Business and Culture of Online Games back in 2005 – which is well worth a read for anyone interested in the metaverse, whether as user or observer.

And your supplementary bonus link: Ian Hughes is one of the folk behind IBM’s big push into the metaverse, and he and a colleague are guestblogging over at TerraNova; his inaugural post examines the possibility of business becoming more like a form of emergent gameplay as interactions increasingly migrate into virtual spaces. Fascinating stuff. [Image by D’Arcy Norman]

2 thoughts on “The metaverse: bad for marketing, great for terrorism?”