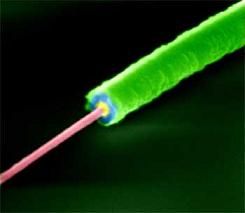 Researchers at a university in Scotland believe that thanks to ever-expanding research into ultra thin nanowires, supercomputers the size of matchboxes might not be more than a decade away. Nanowires, some 1000 times smaller than a human hair, have exhibited strange behaviour due to their small size but the scientists at the University of Edinburgh think they have worked out how to minimise it, leading to their bold prediction.

The department of Physics where I study in Bristol has a massive new nanoscience building nearing completion. The field is full of promising breakthroughs for micro-sized (and so less energy intensive) devices, especially in computing. Anyone hoping to build a palm held supercomputer may well use devices like the holographic nanoassembler coupled with high speed atomic force microscopy to put together such tiny machines. The holographic nanoassembler is especially fascinating research as it never touches the tiny particles, using lasers to manipulate the smallest of objects. Nanowires are also incredibly useful for solar panels, where current efficiency is limited by the large metal substrates that carry electric charge, which obscure some of the sun-collecting surface.

6 thoughts on “supercomputers that fit in your hand”