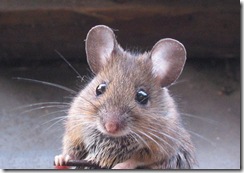 If Jerry had been one of these, Tom would never have had a chance: Case Western Reserve University researchers have bred a line of genetically modified "mighty mice" that can run five to six kilometres on a treadmill for up to six hours, at a speed of 20 meters per minutes, without stopping. Not only that, they live and breed longer than mighty mice, and though they eat more, they remain fitter and trimmer than their unmodified cousins. And as if that wasn’t enough to concern cats, the new mice are also markedly more aggressive. (Via Science Daily.)

But don’t go getting any ideas about creating your own line of super soldiers for world domination. Richard W. Hanson, lead author of the newly published paper about the achievement, is quick to squelch any such science fictional thoughts:

"The technique used to create the animal model reported in our study is not appropriate for application to humans. The ethical implications are such that this approach should not be used in humans, or is it technically possible at this time to efficiently introduce genes into human skeletal muscle, in order to mimic the effect seen in our mice" said Hanson. "Any attempt to tamper with the metabolic processes in human muscle will surely do more harm than good. We believe that this mouse model will provide important insights into the impact of prolonged exercise on the development of cancer in the animal, the effect of diet and exercise on longevity and will increase our knowledge of the factors that regulate energy metabolism in skeletal muscle."

You can view a video of a wild mouse and a mighty mouse on a treadmill here. (Image from Wikimedia Commons.)