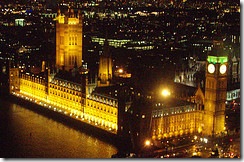 I have to confess to a certain bullish optimism about the potential of internet technologies to transform the way democratic governments operate – but I’m not under any illusions that we’re even close to success yet. There are steps being taken in the right direction, however – Michael Cross takes a look at the UK government’s electronic petition site, and concludes that – while it’s largely used in frivolous ways at the moment – the fact that it’s there at all, allowing admittedly odd (and occasionally crack-pot) opinions to appear on government webspace can only be a good sign. [Image by spjwebster]

Sadly, politics being politics, new technology isn’t always going to be used in the nicest of ways – I was rather disappointed to hear [via MetaFilter] that the US Democrats are crowdsourcing their smear campaigns by supplying video footage of Republican candidates for people to remix as they see fit. Fighting fire with fire … as the old anarchist joke goes, “it doesn’t matter who you vote for, the government always gets in”.

3 thoughts on “The infancy of e-democracy”