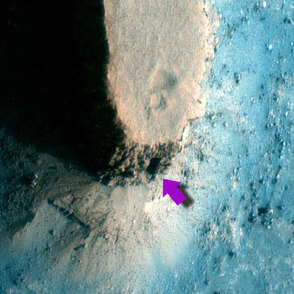 It’s amazing the things you can find in the universe. Images of our neighbouring red planet by the Mars Reconnaissance Orbiter picked up this little space oddity: a teardrop shaped mountain with a rectangular dark patch that, to the human observer, looks like a door.

The oddly shaped mountain, in the frozen ocean region of the planet, was discovered by a Russian reader, rather than a member of the NASA project. The blog article also has some interesting quotes about Mars terraforming plans.

“They’ve done some experiments and have noticed that some types of plants can grow under the low pressure CO2 atmosphere on Mars,” Australian physicist Charles Lineweaver noted when asked about the prospect of altering the atmosphere of our red neighbour.

Of course, this doorway is probably not the path to some alien civilisation gifting us with its future tech but one can dream…

[via Daily Galaxy, image by NASA]