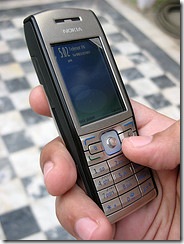 This one must have passed me by at the time, but Warren Ellis’s team of future-culture hounds at grinding.be have brought it to my attention. A New Scientist article from October 2007 talks about Facet, an open source software project that networks mobile phone cameras over Bluetooth:

“To test the software, the researchers attached four phones running Facet to the ceiling of a corridor in their department. The phones were angled so that the camera of each could see a different part of the corridor and so that they could all see peopling walking past.

Whenever a phone detects an object entering or exiting its field of view, it sends a message via Bluetooth to alert the phones on either side. These phones, in turn, pass the message on to other nearby handsets so that eventually the entire network receives the message.

One handset on the network also reports this information to a computer over a normal GPRS cellphone connection.

Each phone determines the distance to its nearest neighbour. The phones currently use the average speed people walk to guess the distances between themselves, based on how long people take to move from one phone’s view to another’s.”

That would put fairly top-range surveillance capabilities into the hands of street-level operations. Maybe the only logical response to nation-states with endemic surveillance of citizens is for the citizens to start watching the watchers? [Image by Asim Bijarani]