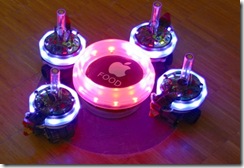 There’s been lots of discussion here about how we should treat robots; maybe we need to consider how robots will treat each other–and, potentially, us. (Via Gizmodo.)

Discover Magazine reminds us, in its review of the Top 100 Science Stories of 2007, that Dario Floreano and colleagues at the Laboratory of Intelligent Systems at the Swiss Federal Institute of Technology created robots with light sensors, rings of blue light and wheels, placed them in habitats containing both glowing “food patches” that recharged their batteries and patches of “poison” that drained them, and gave them software genes that determined how much they sensed light and how they responded. The first batch were programmed to light up randomly and move randomly when they sensed light. The “genes” of the most successful first-generation robots were then recombined and given to the next generation, with a little random “mutation” thrown in. By the 50th generation, they had robots that would light up to alert other robots when they found food or poison…and in one of the four colonies of robots they created, they had “cheater” robots that would lie and tell other robots that poison was food, while they rolled over to a food patch themselves without signalling at all. Other robots, though, were heroes: they would signal danger when they found the poison and die so other robots could safely obtain food.

Liars and heroes in just 50 generations with just 30 genes. Maybe we really will soon need a robot psychologist a la Isaac Asimov’s character Susan Calvin to figure out why our robots do what they do.

The original research paper, published in Current Biology, is here, and there’s even a movie.