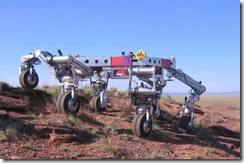 My last couple of posts have been about nanotechnology, so naturally this time around it was an item on something very large that caught my eye (Via NewScientist Space):

NASA engineers are testing out a giant, six-legged robot that could pick up and move a future Moon base thousands of kilometres across the lunar surface, allowing astronauts to explore much more than just the area around their landing site.

ATHLETE (All-Terrain Hex-Legged Extra-Terrestrial Explorer–is there, like a whole department at NASA dedicated just to coming up with acronyms?) would be about 7.5 metres wide, with legs more than 6 metres long. Engineers at NASA’s Jet Propulsion Laboratory (JPL) in Pasadena, California, are now testing two small-scale prototype.