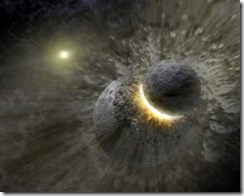 This blog is called Futurismic, but mostly we just talk about the near future. Let’s take a look at the far future…say, a few tens of millions of years down the road.

New studies suggest that after 40 million years or so, there’s a small but not insignificant chance–one or two percent–that the solar system will lose its stability, and, Velikovsky-like, start throwing whole planets off on wandering courses through the rest of the system, where they just might crash into ours. (Via NewScientistSpace.)

Although no one can say for sure what will happen beyond that, new calculations are now providing a rough guide to the more distant future. These suggest that there is a 1 to 2% chance that Mercury’s orbit will get seriously out of whack within the next 5 billion years.

This would tend to destabilise the whole inner solar system and could lead to a catastrophic collision between Earth and either Mercury or Mars, wiping out any life still present at that time.

In the case of a smash-up with Mars, for example, “all life gets extinguished immediately, and Earth glows at the temperature of a red giant star for about 1000 years”, says Gregory Laughlin, a co-author of one of the studies at the University of California in Santa Cruz, US.

Interestingly enough, it might not be the first time that has happened:

Many scientists think a Mars-sized object bashed into Earth in the early solar system, throwing out debris that eventually formed the Moon.

Earth was heated to thousands of degrees by the impact, with an ocean of lava covering its surface. A future replay of that event would be disastrous, Laughlin says.

That last quote qualifies, I think, for understatement of the year.

One thought on “One wandering planet can ruin your whole day”