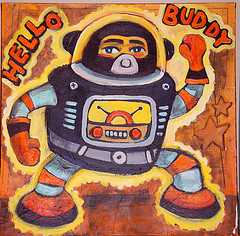 Fully aware of the fact that its sounds like something pulled from the mind of an overcaffeinated Japanese TV executive, this week, scientists were revealed to “have trained monkeys to control a robotic arm using the power of their thoughts.”

The team … first trained the macaque monkeys to retrieve marshmallows — a favourite treat — by using a joystick to control the prosthetic arm. Once they had mastered this, the team inserted electrodes into the animals’ motor cortex and used brain signals … to control the arm’s movement.

During the trials, the animals’ limbs were restrained in plastic tubes so that they could not reach for the food themselves. After some errors, the animals learned to perform subtle movements using the robotic arm, which has a jointed shoulder, elbow and wrist, as well as a gripping hand.

But where the Guardian is distracted by the future implications for “controllable prosthetic limbs for patients with stroke, spinal cord injuries or neurodegenerative conditions”, the BBC report remains relatively grounded in the specifics of the actual lab experiments;

The monkeys were able to use their brains to continuously change the speed and direction of the arm and the gripper, suggesting that the monkeys had come to regard the robotic arm as a part of their own bodies.

The success rate of the experiment was 61%.

“The monkey learns by first observing the movement, which activates its brain cells as if it was doing it. It’s a lot like sports training, where trainers have athletes first imagine that they are performing the movements they desire.”

Of course, the only way you’re going to get the full monkey-mecha-wow! impact is by checking out the video footage.