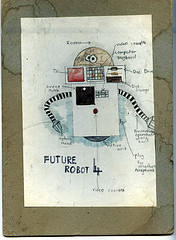 Over at SF Signal, several writers and editors were asked the following question:

Which medium is driving [SF] … books or Film/TV?

There were interesting responses all around I thought, but the most thought proving answer, IMHO, came from io9 editor Charlie Jane Anders, who said:

“The future of science fiction is probably online, in a blend of written material, video and other media. The best science fiction of the future will be open source and collaborative, blurring the distinction between “creators” and “fans” to an increasing degree… there will be obvious advantages in opening things up to collaboration. One major difference between [SF] and most other genres is worldbuilding. And the more people you have involved in your worldbuilding, the bigger and more realistic your world can be. So the most compelling science fictional worlds online will be ones that are, at least to some extent, open-source…”

I can’t point to any examples of open source SF in online print and video venues directly yet, but consider what video games like Neverwinter Nights, Starcraft, et al. are/were doing for RP-style games with level builders or what Second Life is doing for massive online communities, and we may see what Ms. Anders is getting at. [image by Salim]