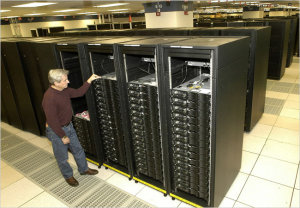 Built by IBM computer scientists using hundreds of Cell microprocessors – hardware originally developed for games consoles, and which power the Playstation 3 – Roadrunner will be used to run simulations of exploding nuclear warheads, although the US military are giving it a run at more pleasant tasks like climate simulation before it settles down to its grim career. [via SlashDot]

Roadrunner clocks in at 1.026 quadrillion calculations per second – that’s nearly twice the speed of IBM’s own Blue Gene/L supercomputer, the previous champion. To put that into perspective, the NYT article equates a petaflop as follows:

“… if all six billion people on earth used hand calculators and performed calculations 24 hours a day and seven days a week, it would take them 46 years to do what the Roadrunner can in one day.”