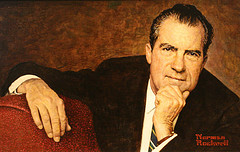 Psychologist Jonathan Haidt explores the question on The Edge, with eight responses from the Reality Club. This self-described liberal suggests:

Democrats would do well to read Durkheim and think about the quasi-religious importance of the criminal justice system. The miracle of turning individuals into groups can only be performed by groups that impose costs on cheaters and slackers. You can do this the authoritarian way (with strict rules and harsh penalties) or you can do it using the fairness/reciprocity foundation by stressing personal responsibility and the beneficence of the nation towards those who “work hard and play by the rules.” But if you don’t do it at all—if you seem to tolerate or enable cheaters and slackers — then you are committing a kind of sacrilege.

Afterwards, Howard Gardner wonders why left-wing societies have lower crime rates and more stable marriages; Michael Shermer decries what he calls liberal bias in academia; James Fowler wonders why people vote at all; Alison Gopnik asks what about the children; Roger Schank gets the last word:

Republicans do not try to change voter’s beliefs. They go with them. Democrats appeal to reason. Big mistake.

Update: In light of stuff like this, at least one of the U.S. Presidential candidates has a website to register to vote or to confirm registration.  I haven’t found it on the other guy’s site, but I’m probably just overlooking it. [Thanks again, Todd]

12 thoughts on “Why do people vote Republican?”