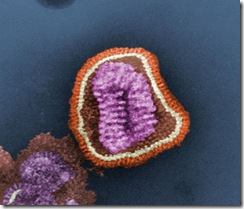 It’s that time of year again, when doctors recommend everyone from children to old folks get jabbed with the latest influenza vaccine that may or may not actually be effective against this year’s strain. And it’s that time of year again when people start worrying about the presumably inevitable next great ‘flu pandemic, which many fear could be coming as avian influenza continues to mutate.

Wouldn’t it be great if you could just get a single shot that would protect against multiple types…including the possible bird ‘flu pandemic?

Clinical trials of just such a vaccine have begun at Oxford University, led by Dr. Sarah Gilbert of the Jenner Institute. (Via PhysOrg.)

Existing flu vaccines work by inducing protective antibodies to proteins on the outer surface of the influenza virus. These proteins differ between strains and change over time, so each vaccine only works against a specific strain.

The Oxford scientists led by Dr Gilbert are taking a new approach. They have developed a novel vaccine that targets internal proteins essential to the flu virus that change very little over time or between strains.

‘By targeting the internal proteins of the virus, we can come up with a universal flu jab,’ explains Dr Gilbert. ‘The same vaccine would work against all seasonal flu and protect against bird flu.’

Such a universal vaccine would not change from year to year, removing the need for annual immunisations. All ages could receive the injection at any time of year, and manufacturers would be able to produce supplies continuously at a sufficient level.

The vaccine…induces T cells, part of the body’s immune system, to kill any cells infected by the flu virus, so controlling the infection. The body maintains a low-level T cell response to flu from previous flu infections which the vaccine should boost to levels high enough to protect against subsequent infection.

The vaccine is just entering a Phase 1 clinical trial, in which 12 healthy volunteers will receive a single injection, then have their immune response monitored over time. If the Phase 1 trial is successful, further clinical trials will follow.

Meanwhile…time to book that annual ‘flu shot. After all, it might work.