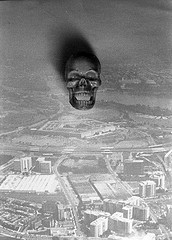 An intriguing essay on the treatment and development of antimatter (or “contraterrene” matter) in science fiction from physicist William S. Higgins:

In 1940, Rojansky speculated that some objects in our solar system might consist of contraterrene matter. Certainly, some do not; fallen meteorites contain the same elements as terrestrial materials. If, however, a contraterrene object were orbiting the sun or passing through the solar system, it would be steadily bombarded by ordinary dust and gas. The resulting annihilation would gradually heat and erode its surface, causing volatile materials to escape and surrounding the object with a cloud of debris. In other words, it would look very much like a comet. Were some comets contraterrene?

This sparked John Campbell’s restless imagination. He imagined that space-going miners might pursue contraterrene asteroids as a rich source of energy, despite the deadly radiation risks in handling untouchable material. After author Robert Heinlein turned down the idea, Campbell offered it to veteran writer Jack Williamson. Williamson set to work.

His story, “Collision Orbit,” appeared in the July 1942 issue of Astounding Science Fiction under the pen name Will Stewart. In it, engineer Jim Drake struggles to exploit the energy of contraterrene asteroids by finding a way to manipulate them without touching them, using magnetic fields. (Read the logbook from this issue for more information.)

Ooh yes do check it out.

[via Boing Boing, as ever][image from Don Fulano on flickr]

One thought on “Antimatter in fiction”